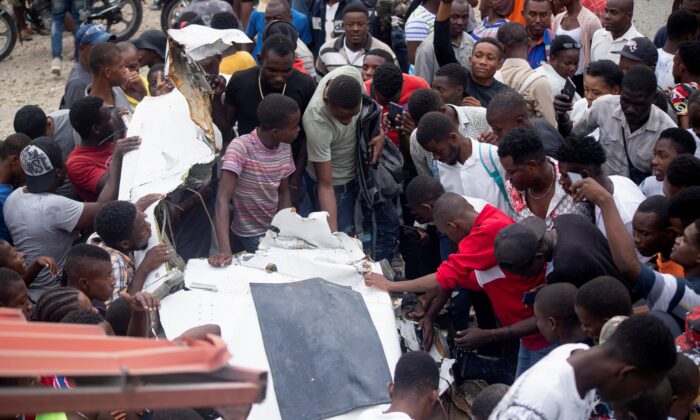 People gather around the wreckage of a small plane that crashed onto a busy street, killing multiple people including the pilot, in Port-au-Prince, Haiti, on 20, 2022. (Lutherson Leon/Reuters)
Americas

PORT-AU-PRINCE—A small plane crashed onto a busy street in the Haitian capital of Port-au-Prince on Wednesday, killing at least six people including the pilot, officials said.

The plane took off from the Port-au-Prince airport at 3:44 p.m. ET (1944 GMT) on route to the Haitian city of Jacmel, the Haitian civil aviation authority said, adding the plane suffered engine failure and sent a distress alert at 4:04 p.m.

“I extend my sympathies to the families of the victims, who have been just plunged into the greatest desolation by this new tragedy,” Prime Minister Ariel Henry wrote on Twitter, without specifying the number of dead or wounded.

Jude Edouard Pierre, mayor of the commune of Carrefour where the plane crashed, said six people had died. A government source said the pilot died after being taken to a hospital.

Videos circulating on WhatsApp showed the broken wreckage of a plane in the middle of a road along with what appeared to the bodies of victims of the crash. Reuters was unable to independently verify the origin of the videos.