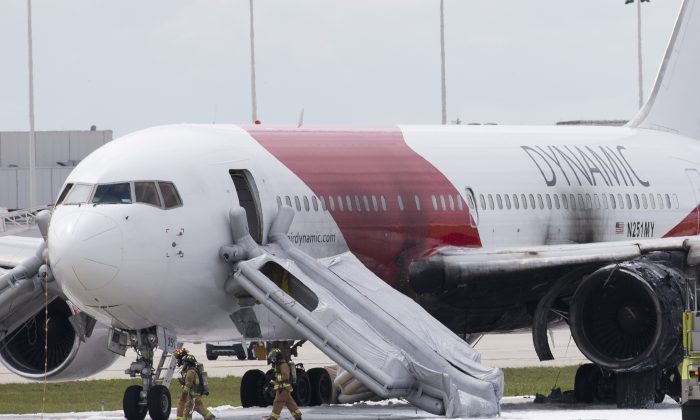 Firefighters walk past a Dynamic Airways Boeing 767, Thursday, Oct. 29, 2015, at Fort Lauderdale/Hollywood International Airport in Dania Beach, Fla. The passenger planes' engine caught fire Thursday as it prepared for takeoff, and passengers had to quickly evacuate on the runway using emergency slides, officials said. The plane was headed to Caracas, Venezuela. (AP Photo/Wilfredo Lee)
US

DANIA BEACH, Fla.—A jet plane’s engine caught fire as it prepared for takeoff from Florida and more than 100 passengers had to evacuate using emergency slides. One person was seriously injured, officials said.

Dozens of passengers could be seen in video footage Thursday gliding down the slides of the Dynamic Airways flight, which was bound for Caracas, Venezuela. Some ran from the plane into the terminal at Fort Lauderdale/Hollywood International Airport as fire crews rushed to put the fire out.

Andres Gallegos said he was one of the first passengers to use the chutes to evacuate.

“I heard a loud bang. I turned around, saw the lights, saw the flames and I ran to the front of the aircraft,” said Gallegos, who said it took about 30 seconds for the plane doors to open. “It was pretty nerve-wracking, knowing that the door wasn’t opening and that something was on fire.”

“In that moment, the only thing going through my mind is trying to get off the plane,” passenger Daniela Magro said.

A total of 21 people were injured, most of whom were treated at a hospital and released, said Broward Sheriff Fire Rescue spokesman Mike Jachles. A male passenger who fell and hit his head while running on the tarmac was seriously injured and still hospitalized late Thursday, Jachles said.

Once inside the airport, passengers expressed frustration, saying they’d been held in a room for more than an hour and had not heard from the airline.

Don Dodson, the director of operations for Dynamic Airways, said airline officials had set up a crisis center, flown in additional airline representatives to help passengers and arranged for a relief flight to take passengers to their final destinations.

Dynamic is a 5-year-old airline that connects Fort Lauderdale, New York, Venezuela and Guyana. It operates seven 767s. Dynamic said on its website that its Boeing 767s can accommodate up to 250 people. Officials said 110 passengers and crew were onboard Thursday’s flight.

Passengers on another plane on the runway recorded the fire and posted video to Twitter showing plumes of thick black smoke coming from the plane.

An air traffic controller told the pilot “a lot of fluid” was leaking from his left engine and then urgently said the engine had caught fire and that he was dispatching firefighters, according to an audio recording posted by WSVN.

Airline officials said the onboard fire extinguishing fluid was not enough to put out the fire.

Dynamic began servicing Caracas in July, after several other major airlines ended or slashed service to Venezuela over the government’s refusal to pay an estimated $4 billion the carriers say they have trapped in the country.

For Venezuelans hoping to travel abroad, the options have been severely reduced to little-known carriers such as Dynamic or domestic carriers, which due to the country’s economic crisis, have struggled to import replacement parts.

Airline officials said they’ve already started reviewing records for the crew and the plane, which was last inspected in June and had a new engine with less than 200 hours of flight time. Nine crew members were onboard — more than required — and were a very experienced team, which helped evacuating passengers quickly and seamlessly, Dodson said.

Investigators in Las Vegas Seek Cause of Plane’s Engine Fire

“It’s just a very unusual event. Something malfunctioned. We’re not aware of what happened,” he said.

NTSB online records show only one previous accident involving Dynamic. In 2011, a Dynamic flight attendant suffered serious injuries when a flight encountered moderate turbulence. The plane was not damaged and landed safely.