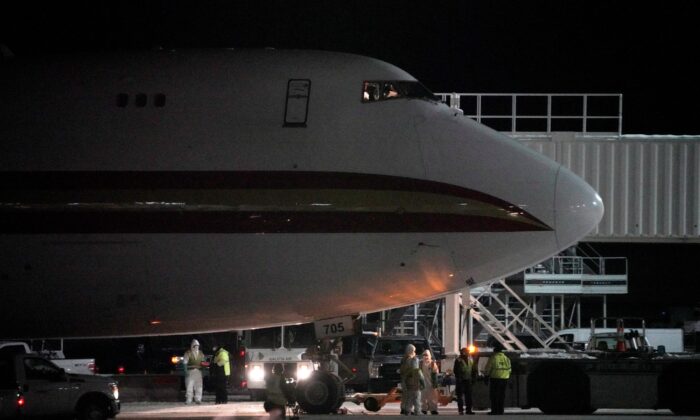 An aircraft chartered by the U.S. State Department to evacuate government employees and other Americans from the novel coronavirus threat in the Chinese city of Wuhan, is seen on the tarmac after arriving at a closed terminal at Ted Stevens Anchorage International Airport in Anchorage, Alaska on Jan. 28, 2020. (Kerry Tasker/Reuters)
CCP Virus

A plane carrying around 200 American citizens who were evacuated from Wuhan, China—where the new coronavirus outbreak started—was diverted to March Air Reserve Base in Riverside County, California, late Jan. 28.

The Boeing 747 stopped at a private terminal at Ted Stevens Anchorage International Airport in Alaska before taking off to its final destination.

The plane was slated to land at Ontario International Airport, about 35 miles east of Los Angeles, but was diverted by the Centers for Disease Control (CDC).

Curt Hagman, chairman of the San Bernardino County Board of Supervisors and a commissioner at Ontario airport, said that CDC officials alerted him to the diversion.

“Ontario International is one of the repatriation airports for the West Coast and we are always prepared to receive our citizens abroad in times of emergencies,” Hagman said in a video. “We were prepared but the state department decided to switch the flight to March Air Force Base for logistics that they have.”

Those logistics weren’t clear. The CDC didn’t immediately return a request for comment. In a statement Tuesday morning, Department of Defense press secretary Alyssa Farah said: “March Air Reserve Base and the Department of Defense stand ready to provide housing support to [the Department of Health and Human Services] as they work to handle the arrival of nearly 200 people, including Department of State employees, dependents and US citizens evacuated from Wuhan, China.”

San Bernardino County said in an earlier statement that the plane would be carrying up to 240 U.S. citizens, including nine children. The Ontario airport “was designated by the federal government as the official repatriation center for California about a decade ago, and various county departments have participated in numerous comprehensive repatriation exercises with state and federal agencies during the past several years to ensure the county and all other agencies are prepared for this type of event,” the county stated.

Officials were ready to house the evacuees in a space at the airport.

Anyone who showed symptoms in any of the screenings before landing at the base wouldn’t be allowed on board, officials said.

Alaska officials said all 201 passengers on board passed medical screening and continued onto California.

“For many of us directly involved, this has been a moving and uplifting experience,” said Alaska’s Chief Medical Officer Dr. Anne Zink in a statement.

“The whole plane erupted in cheers when the crew said, ‘Welcome home to the United States.’ It is easy to stay focused on all that we had to do in a short period of time to prepare and respond, but at the end of the day, this mission was about people. It was about American citizens, some of whom were working to serve our country. It was about families, and it was about helping each other in a time of need.”

Several countries evacuated citizens from Wuhan even as the World Health Organization claimed that evacuations weren’t necessary. Japan, Australia, and South Korea also sent planes to evacuate passengers from the epicenter of the virus.

Five Americans have tested positive for the virus; two in California, one in Washington state, one in Arizona, and one in Illinois. All five traveled to Wuhan.

Asymptomatic transfer has been reported in other countries but U.S. health officials said on Jan. 28 that they haven’t been able to confirm the transfer, noting China hasn’t made certain data available for examination.

Over a dozen other countries have confirmed cases, including Canada, France, and Thailand. At least three foreigners—two from Australia and one from Pakistan—have contracted the coronavirus in China, deputy head of the Guangdong Health Commission Chen Zhusheng said on Jan. 29.

British Airways and All Nippon Airways, a Japanese airline, suspended flights to China.

There were reports that the U.S. government was considering suspending flights from China amid the outbreak. Health Secretary Alex Azar said that the option is on the table but a final decision hasn’t been made yet.

Azar told reporters on Tuesday that screening would be expanded from five to 20 airports as officials continued to assess the rapidly evolving situation.