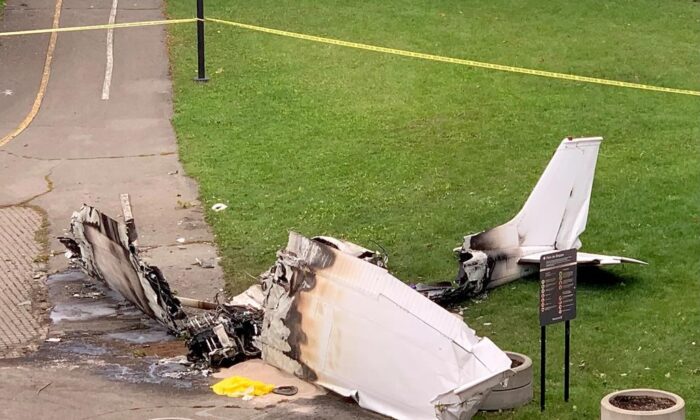 The burned-out remains of a small aircraft are seen at a crash site on Ile-Ste-Helene, a small island in Montreal, on Oct. 3, 2021. One person was pronounced dead and another hospitalized following the crash, which happened Saturday night. (The Canadian Press/Graham Hughes)
Canada

MONTREAL—A plane that went down on an island near Old Montreal on Saturday night was carrying a marriage proposal banner at the time of the deadly crash, authorities said Sunday.

A spokesman for Canada’s Transportation Safety Board said the aircraft was towing a banner that read “will you marry me” when it crashed, killing a passenger. The pilot remained in hospital as of Sunday night.

“We are looking to speak to the pilot when possible,” Chris Krepski told The Canadian Press.

Montreal police said they answered a call reporting a crash that happened at roughly 6 p.m. at Park Dieppe near the Concorde Bridge of Montreal’s Ile Sainte-Hélène, not far from where a music festival was taking place.

Police did not share details about the victims except to say that they are believed to have been the plane’s only two occupants.

Krepski said in an interview that officials received reports of engine trouble on the Cessna 172 aircraft, but investigators have yet to determine the cause of the crash.

“We haven’t ruled out anything yet,” he said. “We need to take a close look at everything.”

Krepski said the proposal banner, which is believed to have fallen into the St-Lawrence river shortly before the crash, has not been found.

The board dispatched investigators to the scene to gather details. Remaining debris was to be sent to an Ottawa lab for testing on Sunday.

“The TSB investigators were documenting the site, examining the wreckage, getting information from witnesses and coordinating with the Montreal police,” Krepski said.

Event producer and promoter Evenko confirmed on Twitter Saturday night that no activity was affected at the popular Osheaga festival, which was taking place not far from the scene of the crash.