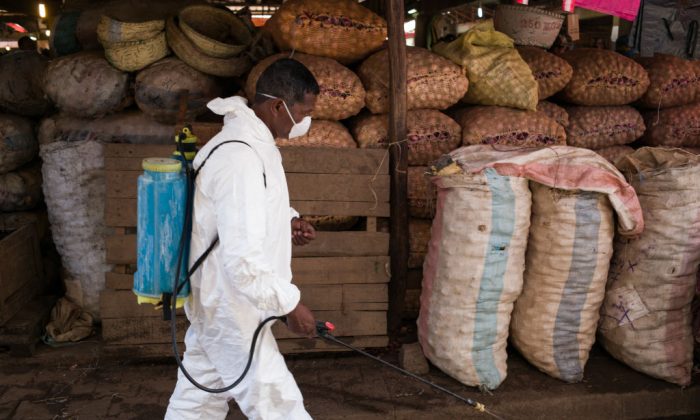 A council worker walks past sacks of potatoes as he sprays disinfectant during the cleanup of the market of Anosibe in the Anosibe district, one of the most unsalubrious district of Antananarivo on Oct. 10, 2017. (Rijasolo/AFP/Getty Images)
Africa

The plague is spreading in Madagascar, in the worst outbreak for 50 years.

Outbreaks are common in the island nation, typically making up around half of the world’s cases every year. This year, however, “plague season” came early, causing alarm as it rapidly spread beyond normal areas, accelerated by a rarer form of the disease.

One thousand and eight hundred people are thought to have been infected in the last three months in Madagascar, according to a World Health Organisation (WHO) report on  Oct 31. In a typical year, approximately 1,000 are infected worldwide.

WHO supports #Madagascar to respond to the #plague outbreak & works w/ nearby countries & territories to reduce the risk of regional spread. pic.twitter.com/guDZroUEEx

One hundred and twenty-seven deaths have been reported since August, according to the WHO.

The plague is usually associated with the Black Death epidemic that killed 50 million people in Europe in the 14th century, spread by rats, and their fleas.

That form of plague—known as bubonic plague—however, is less deadly than the airborne form, pneumonic plague, which is currently driving the epidemic in Madagascar.

Professor Jimmy Whitworth, an international public health scientist at the London School of Hygiene & Tropical Medicine, told the Mail Online that the outbreak could continue to spread because it had reached heavily populated cities.

He told MailOnline, “Madagascar is the most plague endemic country in the world and has outbreaks every year at about this time, this outbreak though is the worst for 50 years or more.”

Pneumonic plague is spread through coughing, spitting, or sneezing and can kill within 24 hours if not treated.

Extra screening has been put in place at airports in Madagascar to prevent the disease from spreading.

The number of new #plague cases in #Madagascar is declining. Here is the latest situation report as of 31 October. https://t.co/KoHuS1yjMD pic.twitter.com/CQXXhAFNnT

No vaccine is available to treat the plague, but it can be treated with antibiotics, according to the Center For Disease Control.

And according to the WHO, the plague can be easily prevented and treated with antibiotics if detected early enough, and infection can be prevented through the use of standard precautions.

“An outbreak of plague no longer unfolds in the manner portrayed by our history books,” said Dr. Sylvie Briand, director of the WHO’s Infectious Hazard Management Department, in a statement. “Plague is an old disease, but the challenges it poses today are contemporary and fundamentally different from what we had even 40 years ago.”

A spokesman for the WHO said, according to the Express: “While the current outbreak began with one large epidemiologically linked cluster, cases of pneumonic plague without apparent epidemiologic links have since been detected in regions across Madagascar, including the densely populated cities of Antananarivo in the central highlands and Toamasina on the east coast.“Due to the increased risk of further spread and the severe nature of the disease, the overall risk at the national level is considered very high.”Nine countries and territories, including tourist destinations such as the Seychelles, Mauritius, and the French territory La Réunion, have been advised to review their protocols for quarantining infected visitors.

Madagascar typically reports around 500 cases of the plague annually, with plague season runs from September to April.