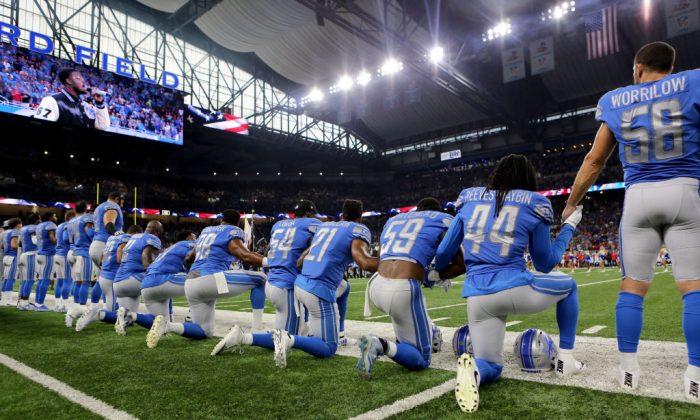 Members of the Detroit Lions take a knee during the playing of the national anthem prior to the start of the game against the Atlanta Falcons at Ford Field on September 24, 2017 in Detroit, Michigan. (Rey Del Rio/Getty Images)
Entertainment News

Have the “pizza wars” begun?

Pizza Hut said on Wednesday that protests during the playing of the national anthem before NFL games hasn’t hurt its sales—one day after Papa John’s CEO John Schnatter said that his firm is experiencing declining sales due to the protests and the NFL’s lack of leadership on the matter.

“The NFL has hurt us,” Schnatter said in an earnings call earlier this week, according to ESPN. “We are disappointed the NFL and its leadership did not resolve this.”

“Leadership starts at the top, and this is an example of poor leadership,” Schnatter said.

Papa John’s, unlike Pizza Hut, is the official pizza company of the NFL and has been since 2010. Pizza Hut doesn’t have any affiliation with the NFL, CNBC pointed out. But Pizza Hut saw a 1 percent growth this quarter, which is higher than expected.

“We’re not seeing any impact from any of that on our business,” the company said during an earnings conference call, CNBC reported.

Yum Brands, the parent company of Pizza Hut, added that live sporting events—including baseball, college football, and the NFL—are still important to its business. CNBC noted that Pizza Hut is the official sponsor of the NCAA’s college football games. There are no national anthem protests in college games.

Papa John’s has a deal with not only the NFL, but 23 NFL teams. According to an ESPN report, the firm said it has withdrawn much of its NFL advertising this year.

Papa John’s President and Chief Operating Officer Steve Ritchie told the call that the decline in sales will likely “persist unless a solution is put in place,” The Hill reported.

According to CNBC, Papa John’s executives specifically cited a “combination of declining NFL viewership and negative consumer sentiment” over the national anthem protests and the NFL in general causing sales to drop.