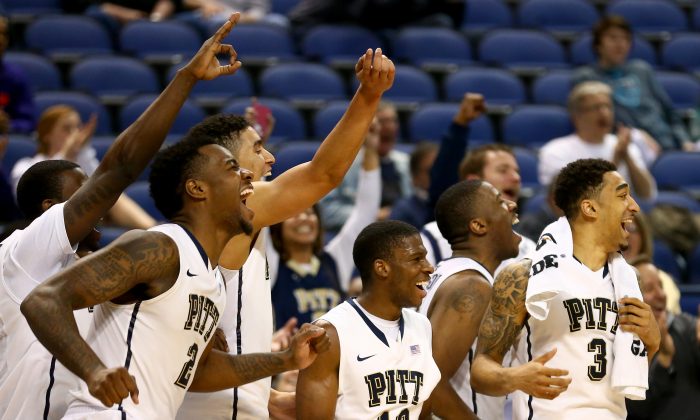 The Pittsburgh Panthers celebrate after defeating the Wake Forest Demon Deacons 84-55 during the second round of the 2014 Men's ACC Basketball Tournament at Greensboro Coliseum on March 13, 2014 in Greensboro, North Carolina. (Streeter Lecka/Getty Images)
College Sports

The Pittsburgh Panthers and North Carolina Tar Heels face-off in the ACC tournament on Friday, March 14.

The game is set for a 2 p.m. ET tip-off at the Greensboro Coliseum in North Carolina.

The game will be broadcast on ESPN2 and the ACC Network.

A live stream is available on THEACC.com.

The Tar Heels automatically made it into the quarterfinal game while Pittsburgh handily beat Wake Forest 84-55 in the first round of the tournament.

The winner will face the winner of Virginia-Florida State on Saturday.

The tournament championship will be at 1 p.m. on Sunday, March 16.