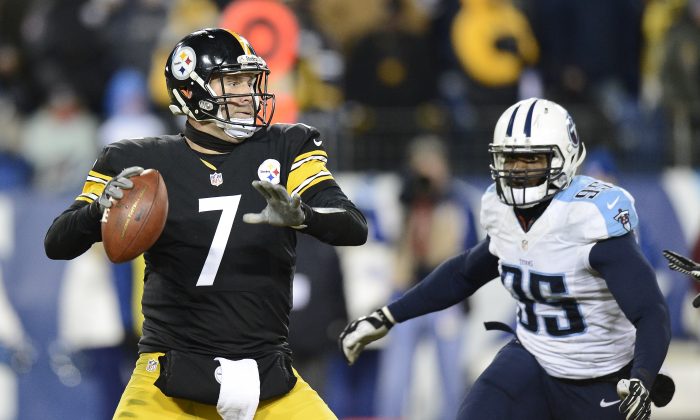 The Pittsburgh Steelers defeated the Titans Monday, and have a bye week coming. Here’s some of the latest buzz:

RB LeGarrette Blount was released by the Steelers after he left the field early in the victory against the Tennessee Titans on Monday.

“We believe the decision to release LeGarrette is in the best interest of the organization and wish him the best of luck,” coach Mike Tomlin said, via ESPN.

“If you don’t want to be here, don’t be here,” Steelers center Maurkice Pouncey also said. “He had a decision to make as a man, and he made it. You know the consequences.”

The Pittsburgh Post-Gazette elaborated on the incident, saying Blount tried to get dressed and leave while the Steelers were still playing.

“He dressed and left the locker room, apparently headed for the team bus that would take them to the airport. At least one player thought they should leave him in Nashville,” the paper said via USA Today.

Meanwhile, a Twitter photo showed him in street clothes while other players still had their pads and shoes on in the locker room.

Blount has been phased out of the Steelers’ offense with the emergence of Le’Veon Bell.

He’s played for four NFL teams in his five years in the league.

Blount dressed and ready to go while rest of team still in their pads. pic.twitter.com/OhFGdj8CjC

Mike Mitchell has been told by Steelers staff members to stay of Twitter after he posted inflammatory messages.

ESPN reported that he told one person to “kill yourself” and used obscenities.

Mitchell signed a $25 million contract with the Steelers earlier this year to replace Ryan Clark.

During the Steelers’ loss to the Jets on Nov. 9, Mitchell attempted to disrupt the Jets’ “victory formation,” drawing ire from opposing players and coaches.

Blount reportedly left the game early because he isn’t getting enough carries.

“I don’t know exactly what happened, but if it is true, it’s disturbing because I would think he would be happy for a close friend and of his fellow position guy,” Roethlisberger said, according to CBS.

“I figured he would be happy, but like I said, I’m not going to rush to judge because I don’t know exactly what happened. So, I think today we will be able to find out more details.”

He added: “If it was a guy who has been here for a while and we know and it was just a lapse in judgment and he was upset about something, I think it would be easier to look past. But, it will be tough if it was just for pure selfishness reason because that is not what the Pittsburgh Steelers are. It’s not what we are about, but like I said, I don’t know anything about that yet so I’m not going to judge right now.”

Polamalu could be back Week 13

Strong safety Troy Polamalu was out against the Titans and Steelers coaches said they hope to get him back in Week 13.

The Steelers have a bye week before playing the New Orleans Saints.

Polamalu has been sidelined with a knee injury since Week 9. He has 51 tackles and one forced fumble this season.

CBS Sports NFL Insider Jason La Canfora reports Saturday notes that the “Steelers remain optimistic” about him coming back within the timeframe.