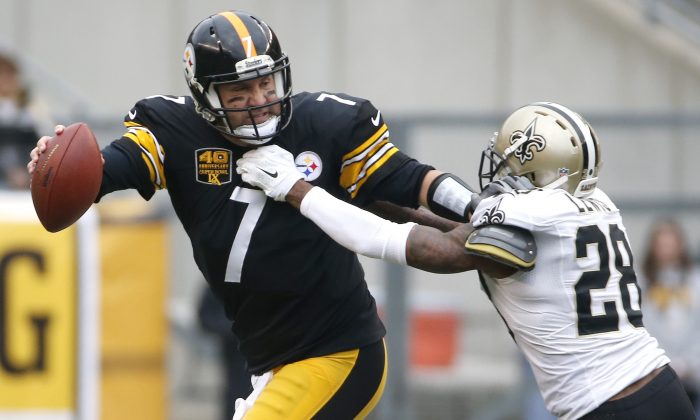 Following a loss to the New Orleans Saints on Sunday, the Steelers will play the Bengals in Cincinnati on Sunday afternoon. Here’s some of the latest updates:

Keisel out for season

The 36-year-old was placed on injured reserve after he suffered a torn triceps against the Saints on Sunday.

The Steelers were forced to sign DE Clifton Geathers to take Keisel’s spot on the roster, according to ESPN. It’s the sixth team Geathers has played on.

While Keisel is signed for next season, it’s likely that the Steelers could let him go due to his injury and age.

Rookie Stephon Tuitt will likely replace him in the nickel package.

“He’s a Yinzer. He’s a Pittsburgh Steeler. He’s Mr. 412 or Mr. 724 or whatever you want to call him. That’s Brett Keisel,” CB Ike Taylor said of Keisel, according to the Pittsburgh Post-Gazette.

Added DE Cam Heyward, “I know how much Keis sacrificed to come back this season. I know what he does to take care of his body. I hate that he has to go out like that.”

Roethlisberger gets blame in Saints loss

Ben Roethlisberger got panned by Pittsburgh media for the Steelers’ loss against the Saints.

Ron Cook of the Pittsburgh Post-Gazette writes: “Most of the time, Roethlisberger doesn’t deserve the blame. Sunday, he did.”

“Don’t be fooled by Roethlisberger’s final numbers. He passed for 166 of his 435 yards and both touchdowns on the Steelers final two drives, long after the outcome had been decided,” Cook notes.

“Earlier, when it was a competitive game, he wasn’t nearly good enough. He completed 8 of 22 passes for 115 yards and an interception in the first half, then threw a bad interception on the Steelers first possession of the third quarter. The Saints quickly turned that turnover into a touchdown and a 21-6 lead.”

He admitted as much: “I need to play better.”

Roethlisberger had injured his throwing hand in the loss but played through it.

LeGarrette Blount getting released a few weeks ago, Le’Veon Bell got 33 carries against the Titans right after that. He got 21 carries on Sunday against the Saints.

Roethlisberger said he hopes Bell isn’t ran “into the ground” from too much use.

“I don’t know of a running back since I’ve been here that has been able to basically play every single snap,” he said, according to CBS.

“I think that speaks volumes for his conditioning and the work this that he has put in. But you do have to be careful. I hope we don’t run him into the ground, if you will. It’s that stretch of the year where everyone is going to give it everything they have and I know he probably wants to be in there every single play because that’s the kind of player he is.”

Roethlisberger described the loss of Keisel for the season as “a tough on.”

“He is one of the toughest people I know and to see him in so much pain really broke my heart.” Roethlisberger added. “This will be a momentum for him if he so chooses to want to work and comeback and give it another go around.”

Antonio Brown currently leads the league with 96 catches for 1,258 yards after 12 games. He’s also got 11 touchdowns.

There’s a possibility that Brown could break all three records for the Steelers in terms of yards, catches, and touchdowns.

Brown is “on pace to shatter the team’s records in yardage (his own at 1,399) and receptions (Hines Ward has it with 112),” writes SB Nation in noting the development.

“His eight catches in the team’s 35-32 loss to the New Orleans Saints moved him to 96 on the season, the third-highest, single-season total in team history. He needs to average three catches in each of the last four games to break Ward’s mark, and needs 142 yards in that same span to break his own yardage record,” the site says.