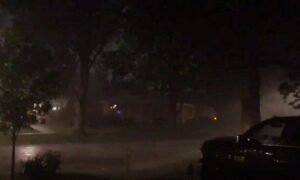 A Pittsburgh-area woman who wrote on Facebook that “Mommy loves you, my angel” after her 3-year-old daughter was found dead in a ravine was sentenced Tuesday to 20 to 40 years behind bars for killing her.

Adriene Williams, 27, of Wilkinsburg, rejected a plea bargain that would have sent her to prison for 15 to 30 years. She was convicted at trial in August of third-degree murder and other charges in the death of her daughter, Adrionna.

Williams maintained her innocence Tuesday, but the judge was unmoved and handed down the maximum sentence.

“You took a baby out of safety, put her in harm’s way, then suffocated her,” Allegheny County Judge Anthony Mariani told her.

Prosecutors contend Williams asphyxiated Adrionna — they never said where or how — before leaving the girl’s body in a wooded area of Swissvale in June 2015. Williams’ attorney argued the failure to pinpoint exactly where and how the girl died meant Williams shouldn’t be convicted.

But prosecutors said a mountain of circumstantial evidence proved Williams killed he girl.

Surveillance video and cellphone records show Williams drove to and from the area where the girl’s body was found despite claiming she drove to work in a different area while the girl was at her grandmother’s house that day.

Police found several colored paper clips near the girl’s body similar to clips later found in Williams’ car. Also found in the car were small splotches of mud and Williams’ uniform shirt, which was stained with the girl’s DNA and watermelon — a treat the girl was eating just before she was last seen.

Family members recalled that Williams had seemed to be annoyed that her daughter needed help cleaning herself after using the bathroom shortly before Williams was supposed to leave for work. Prosecutors argued that Williams was overwhelmed being a single parent while working and studying for a criminal justice degree.

Sonja Crosby, Adrionna’s paternal grandmother, held a pink urn with a teddy bear on it containing the girl’s ashes as she spoke after the sentencing.

“I shouldn’t be holding my grandbaby in an urn,” she said.

Adrionna’s body was discovered by a dog walker about 40 minutes after her family reported her missing June 14.

The morning after Adrionna’s body was found, Williams mourned her daughter on Facebook, writing, “Give me my angel back, please” and “Mommy loves you, my angel.” The girl’s death also prompted a march several days later as community leaders decried the crime and asked for the public’s help in finding her killer.