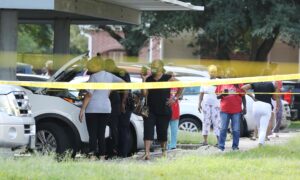 Federal prosecutors have charged the suspected gunman in a massacre that killed 11 people at Pittsburgh synagogue with 29 charges, including 11 counts of using a firearm to commit murder.

The charges also include weapons offenses and alleging that Bowers seriously injured police officers while obstructing the exercise of religious beliefs resulting in death.

Scott W. Brady, the U.S. Attorney for the Western District of Pennsylvania, announced the charges late Oct. 27, about 12 hours after they say Robert Bowers opened fire inside the Tree of Life synagogue at the Tree of Life Congregation in Pittsburgh’s Squirrel Hill neighborhood.

The charging documents were not immediately available in a federal court records database. Prosecutors have scheduled a Sunday morning news conference to discuss the case.

President Donald Trump has since ordered flags at federal buildings throughout the United States to be flown at half-staff in “solemn respect” for the shooting victims at a Pittsburgh synagogue.

Trump issued the proclamation late Oct. 27, shortly after returning to Washington from speaking at the Future Farmers of America convention in Indianapolis and a campaign rally in Murphysboro, Illinois.

Throughout the day, he expressed sorrow, called for justice and bemoaned hate, getting regular updates on the shooting.

In Illinois, Trump told the thousands attending the rally that the press has asked him whether he was going to cancel his two appearances after the tragic shooting.

He said, “I thought about it for a little while.”

“We have our lives, we have our schedules and nobody’s going to change it ok.”

Then, Trump asked the crowd, “If you don’t mind, I’m going to tone it down a little bit, is that ok?”

The flags to be lowered until Oct. 31.