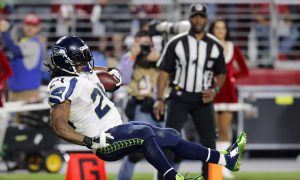 The Steelers are the first team in NFL history with a 4,500-yard passer, a 1,500-yard receiver and 1,300-yard rusher in the same season. The Steeler’s monster trio includes QB Ben Roethlisberger, RB Le’Veon Bell, and WR Antonio Brown.

Drafted in 2004, the 32-year-old Roethlisberger has now been the Steeler’s franchise quarterback for exactly a decade.

In the process, he has made three Pro Bowls, and led the Steelers to two Super Bowl victories.

However, Roethlisberger has never had more statistical success than in his 10th season this year.

With still a game left to play, Roethlisberger has set a career high in yards(4635) and can tie or beat his career high in touchdowns(32)depending on his performance in Week 17 — he has 30 touchdowns through 15 games.

The highlight of Roethlisberger’s season was Weeks 8 and 9, where he became the first quarterback to throw six touchdowns in back to back games, doing so against the Colts and then the Ravens.

Brown is ranked #1 in pro football focus’s wide receiver rankings, and is widely considered one of top 5 receivers in the league. He leads the NFL in receiving yards with 1570.

One of Brown’s greatest assets is his consistency. He is currently on a NFL-record 31 consecutive games with at least 5 catches and 50 yards. It is a kind of streak the league has never seen before, and dates back to December 30, 2012.

Coming in to the league, one of the Brown’s biggest criticisms was his physical attributes — Brown stands at 5’10 and 186 pounds. Therefore, Brown’s streak is also a testament to his football IQ, or what Ben Roethlisberger called his “unbelievable awareness of football knowledge”.

Despite Roethlisberger and Brown’s outstanding play, it is Bell who was named the Steeler’s team MVP for 2014.

In his second season in the NFL, Bell has had a true breakout campaign.

From his rookie to sophomore seasons, he has seen vast improvements in rushing yardage(860 to 1341), and receiving yardage(399 to 774).

The highlight of Bell’s season was likely Week 12, where he rushed for 204 yards on 33 carries versus the Tennessee Titans on Monday Night Football.