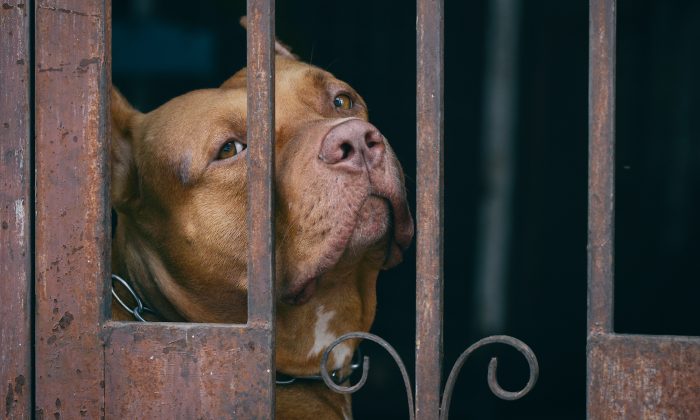 A file photo of a pit bull. (Shutterstock)
Southern California

PICO RIVERA, Calif.—A 1-year-old girl was rushed to a trauma center after she was injured in a pit bull attack in Pico Rivera, and she is expected to undergo surgery on April 25 for a hip fracture at Los Angeles County + USC Medical Center.

Paramedics were sent to the 9600 block of Homebrook Street at 10:19 p.m. on April 24 on a report of a dog bite incident, according to the Los Angeles County Fire Department.

The girl, a toddler named Ruby Ann Cervantes, is one of four people injured in the dog attack. Fire officials told Fox 11 that several people were injured and four victims were taken to a hospital and required stitches.

Cervantes has wounds to her shoulder, legs, and ankles. Her mother, Jamie Morales, told Fox 11 that she fought off the dogs to protect her daughter.

“Like many others this morning I was horrified and dismayed at the news of the unprovoked attack on a child by a family’s pit bulls,” Pico Rivera Mayor Monica Sanchez said in a statement issued on the morning of April 25. “This is a very unfortunate incident and I’d like to extend our deepest condolences to the family and best wishes for a swift recovery for the child and injured members of the family. I’ve also asked our city manager to immediately offer any assistance we can to the family including the availability of crisis counselors.”

According to KTLA5, one of the dogs died, and officials said the other dog involved in the attack will be euthanized.

The attack occurred when one of the dogs who lived at the residence ran into the kitchen, Channel 5 reported. The 3-year-old dog jumped on top of the toddler and was attacking her, the child’s grandmother Margaret Morales said.

The second pit bull ran in seconds later and attacked the girl as her mother and grandmother struggled to get her free.

“He had her by the leg, and I had to get his teeth off of her,” Margaret Morales said. “He bit my hand and my hand’s pretty severely cut open.”

Unable to get her daughter free, Jamie Morales picked up a knife and began stabbing the dogs.

“I had to stab the dog, I had to,” Jamie Morales said. “It was either him or my daughter and I chose my daughter.”

The girl’s aunt was also injured in the incident.