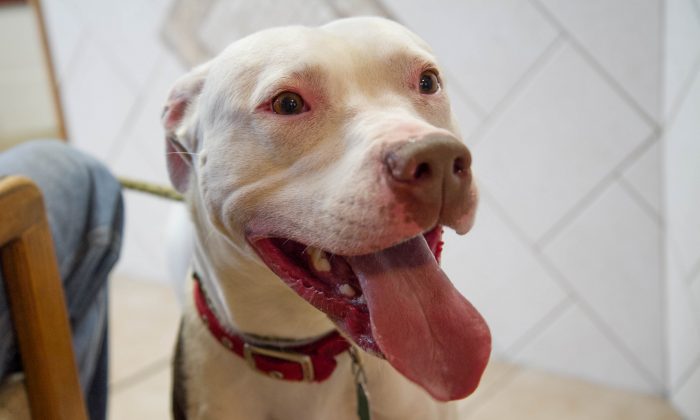 A stock photo of a pit bull at a shelter. (Holly Kellum/Epoch Times)
Trending

A volunteer at a North Carolina said she thought a rescued pit bull was “crying” in now-viral photos.

“I was waiting for them [the shelter workers] to health check a couple of the dogs we were considering pulling, and I was walking up and down the kennels, and I just saw this pit bull sitting there, and she was very humanlike — slumped over and very solemn,” Sarah Sleime told The Dodo. “So I bent over and started talking to her.”

She said that the 7-year-old dog had a litter of puppies, but her puppies were taken away.

“It was the craziest phenomenon,” Sleime said of the dog’s alleged tears.

Sleime said that workers thought she was confirmed.

The dog was then used “as a breeding machine,” she added. “She’s obviously had many, many litters.”

“I posted her video on Facebook, and little did I know, it would be viewed like 700,000 times on the first day,” she added.

“I have a special place in my heart for pit bulls,” Shelton told The Dodo. “I think they’re a very misunderstood dog and a misunderstood breed. And when I saw her in that video, literally crying in a cage, I cried. My kids cried. I showed my husband, and he said we could go look at her tomorrow.”

She added: “They had brought her into a room to meet with us, and we just let her relax. My kids were on the floor with her, and she sat on their laps and knocked them over with kisses.”

A heroic pit bull helped save a family from a house fire and carried a baby outside in Stockton, California.

“I open it and she runs in and starts barking at me like crazy and I was like, ‘OK, this is weird. This is not like her,’” owner Nana Chaichanhda said, Fox40 reported.

As the fire began to rage on the fourplex, 8-month-old pit bull Sasha banged on the back door.

Chaichanhda noticed the building was on fire and went to the bedroom to get her 7-month-old daughter.

Sasha was with her, she said.

“She had already had my baby by the diaper and was dragging her off the bed,” she told the Fox affiliate. “I was like, ‘Oh my gosh, what are you doing?’”

Overall, she said, “Thanks to Sasha we were able to get out safe and call 911.”

In a 13-year analysis, the website says that of 433 fatal dog attacks in the United States, pit bulls contributed to 66 percent, or 284 deaths