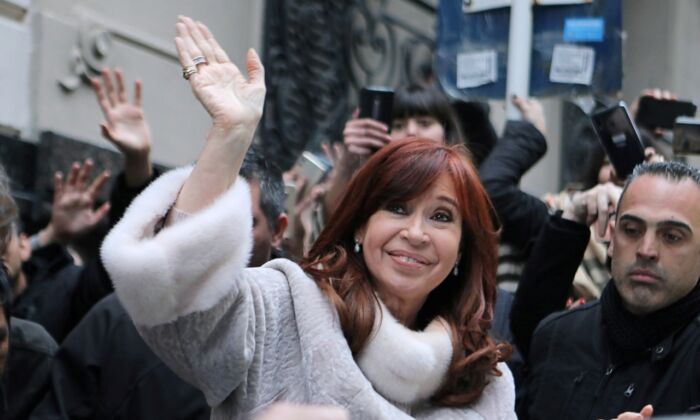 In the fashionable neighborhood of Recoleta in Buenos Aires, a lone gunman attempted to shoot Argentina’s Vice-President Cristina Fernandez de Kirchner while she was returning to her apartment on the evening of Sept. 1.

Minister of the Economy Sergio Massa called the event an “attempted assassination” on Twitter.

This arrives only eight days after legislators warned about the “climate of extreme violence” Argentina is enduring amid subsidy cuts, a collapsed peso rate, decimated foreign currency reserves, and sky-high inflation surpassing 70 percent.

Television cameras captured the event as the vice president arrived at her home in the evening.

Local reporters were already on the scene with inquiries about the vice president’s ongoing trial for corruption, in which she faces up to 12 years in prison.

Loyal fans of Kirchner, who clashed with the police on Aug. 27 while protesting against her trial, made up the majority of the crowd standing outside her home.

When Kirchner turned to address her supporters and the press, the gunman stepped forward from the crowd and stuck a Bersa .32 caliber pistol in her face, visibly pulling the trigger without hesitation.

But the gun misfired.

Security guards scrambled to cover Kirchner while a supporter in the crowd wearing a red shirt turned on the gunman. The Ministry of National Security said that the vice president was out of danger shortly after the event.

Authorities said they arrested the gunman, who is reportedly a 35-year-old man of Brazilian origin. Police confirmed the gun had a full magazine and was “fit for firing” despite failing to discharge a bullet during the point-blank attack.

President Alberto Fernandez addressed the nation on the evening of Sept. 1, calling the attack on Kirchner “a big concern” and the worst violence the country has suffered since its return to democracy in the 1980s.

The head of state asserted that “hate speech”—which he blamed for the attempt on Kirchner’s life—created a dangerous situation for Argentina’s democracy and needed to be removed from society and the media.

“Violence can’t live with democracy,” Fernandez said in his address.

Officials are blaming the opposition and ire surrounding Kirchner’s trial for the attack.

Indicted for fraud in 2016, the vice president is currently standing trial for “unfaithful administration” and colluding with Argentina’s central bank to sell billions in currency futures at below-market rates back in 2015.

However, amid the nation’s continued economic spiral, months of protests over inflation, and near empty foreign currency reserves, locals have grown increasingly desperate and angry with their elected officials.

It has led to a rise in anti-socialism that’s been dubbed “anti-Kirchnerism.”

Some locals point the finger of blame squarely at the former two-term president turned vice president for the nation’s downward spiral.

And this isn’t the first time this year someone threatened the controversial left-wing politician with death.

On July 21, a group of protesters outside the Instituto Patria, where Kirchner keeps an office, threw garbage, kicked doors, and bellowed death threats.

The demonstration was led by a young man who shouted he would go looking for the vice president “with machine guns.”

Police near the scene watched as the leader of the demonstration continued shouting threats through a megaphone, saying he’d take her  “to the gallows.”

“Cristina, now it’s your turn to hang, it’s the only way to get rid of you,” he yelled directly in front of the police.

Argentina’s most vulnerable population has been affected the worst by the country’s economic catastrophe. More than 40 percent of the nation is now living below the poverty line as food and energy prices soar.

Compounding this, residents preemptively withdrew over US$1 billion from national banks in the past seven weeks over fears the government would confiscate dollars and replace them with devalued pesos.

Argentinians have long used dollars as an inflation buffer, but near empty foreign currency reserves leave the government unable to pay its external debts or meet the obligations of the new deal with the International Monetary Fund (IMF).

“The economic crisis in Argentina is so severe. Argentina will default on its debt,” economics professor and finance executive Andrew Lokenauth, told The Epoch Times.

Fernandez’s administration has pinned its hopes of survival on the IMF, which approved a 30 month, $44 billion “extended arrangement” in March.

But conditions must be met for more money to be handed over. Primary among these, the government must demonstrate progress with the country’s economic quagmire by reducing inflation and boosting foreign currency reserves.

Though Lokenauth thinks this is unlikely to happen and says Argentina will be in a bad way for the foreseeable future.

He noted, “The present government continues to suffer from a long legacy of debts, deficits, and outrageously expensive social programs and subsidies. More than a third of the population lives in poverty.”

Meanwhile, legislators are reeling over the attempt on Kirchner’s life as homeless camps continue appearing all over the city, including in wealthier neighborhoods.

Of the estimated 13 million people living in the greater metropolitan area of the capital, more than 5 million exist in dire poverty within slum neighborhoods known as “villas.”

No comment from the vice president’s office was available before publication.