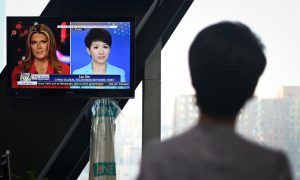 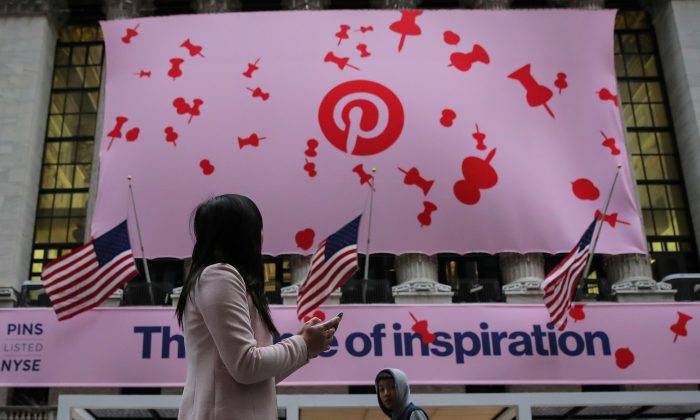 A woman uses her phone as a banner celebrating the IPO of Pinterest Inc. hangs on the front of the New York Stock Exchange in New York, on April 18, 2019. (Brendan McDermid/Reuters)
Social Media

The project team reviewed the social network’s HTML code and discovered the string “mem add [‘liveaction.org’],” which is believed to be blocking Live Action’s website domain.

🚨🚨 YouTube has REMOVED our Pinterest Insider story 🚨🚨 The battle is on 🚨🚨 SUPPORT the insider who leaked the documents and got fired HERE: https://t.co/FLBzuLE65R pic.twitter.com/zWLfW2leRQ

The list was designed to contain hyperlinks to pornographic websites and help Pinterest prevent users from posting such content. The source said websites on the block list cannot be linked in posts from users.

“I do not think [LiveAction.org] should be removed … [even though Pinterest] is not currently removing pro-life/pro-choice content,” Pinterest Trust and Safety Team Member Ginet Girmay said.

Project Veritas tried to post the LiveAction.org link on Pinterest and received an error message, saying “Sorry! Your request could not be completed.”

Other non-pornographic websites have been added to the block list, including zerohedge.com, pjmedia.com, teaparty.org, and other various conservative websites.

Live Action claims the group has been censored in the past and believes social media companies like Pinterest are unfairly targeting pro-life organizations.

“Pinterest says that their mission is to ‘help empower people to discover things that they love’ but despite the fact that millions of people love babies and the pro-life cause, they are secretly censoring our life-affirming messages,” Live Action Founding President Lila Rose said. “Pinterest users deserve to know the truth and our messages deserve to be treated fairly.”

“Religious content is allowed on Pinterest, and many people use our service to search for and save pins inspired by their beliefs,” the social media company said in a statement obtained by Project Veritas. “To protect our users from being targeted based on personal characteristics such as their religion, we have policies in place so that ads and recommendations do not appear alongside certain terms.”

This is why insiders in tech are coming forward and sharing their stories. You can support the Pinterest insider by giving here: https://t.co/R6gY6E1HYO

However, Project Veritas claims it has obtained product code, Slack messages, and internal policies from an insider at Pinterest that suggest the company is actively censoring terms and websites that it considers to be sensitive such as “Christian Easter” and “Bible verses.”

Possible steps that Pinterest can take include blocking auto-complete results in the search bar, adding an advisory message when a term is searched for, changing search results, removing the term from recommended or trending feeds, and blocking email or push notifications.

“The documents we obtained raise questions about whether or not these tech companies really operate like neutral platforms, as opposed to publishers with editorial agendas,” Project Veritas Founder James O’Keefe said.

Project Veritas is continuing to investigate major technology companies and encourages more Silicon Valley insiders to share their stories through the Be Brave campaign.

“One person can make all the difference… one person can bring transparency to big tech,” the anonymous source at Pinterest said.

At @Project_Veritas our motto is “Be Brave And Do Something” — the @Pinterest insider IS OUR MISSION. You can support his efforts here: https://t.co/R6gY6EjiQm https://t.co/LAXPueMaaD