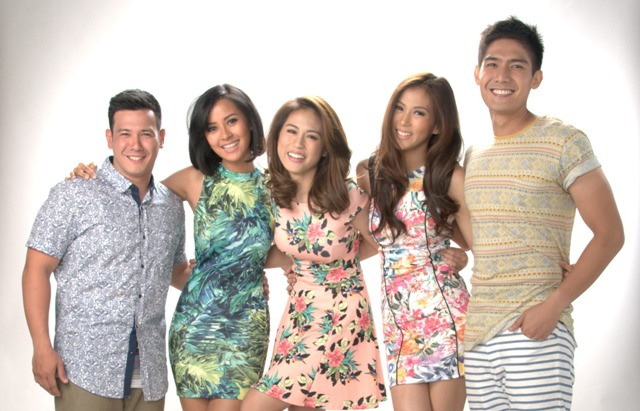 The hosts of "Pinoy Big Brother: All In" (from left) John Prats, Bianca Gonzalez, Toni and Alex Gonzaga, and Robi Domingo. (ABS-CBN)
Entertainment

Pinoy Big Brother season 5, titled All In, started this week. Housemates were announced as well as the hosts.

There are 18 housemates overall, introduced to the public on Sunday.

The first two days have aired so far, with the housemates introduced, and then getting their first weekly task, where they had to divide among themselves the households chores, food, and shower time, among other things. They made two mistakes so far out of five given–not equally sharing lunch and eating chips.

See information about the housemates below (descriptions from ABS-CBN in quotes, with slight edits), along with photos.

“Jane is a teen actress whose television career started when she was just a toddler. After a couple of TV commercials, she was casted to play the young Istah in Marina and became a regular on Goin’ Bulilit. After graduating from Goin’ Bulilit and blossoming into a beautiful teen actress, she got meatier roles in different teleseryes. She is now acknowledged as a serious artist after she bagged a Best Actress nomination in the 2013 New York Festivals for her role as ‘Nene’ in MMK’s ‘Manika.’

“Jane has never a boyfriend, not even an on-screen partner. Her being NBSB (No Boyfriend Since Birth) is by choice, but will love find its way into her heart while inside Kuya’s House? After all, anything can happen inside the famous blue and yellow house, right? :)”

“Axel is the eldest of seven siblings. He and his brothers are both athletic scholars; definitely a big help in the family’s economic condition. In grade school and high school, he was part of the La Salle varsity team. When he reached college, he only made it to Team B unlike his brother who is a legitimate La Salle Green Archer.

“Even with his good looks and strong appeal, he never an official girlfriend. He has been dating someone for two years now, but still hasn’t asked her to be his girlfriend. Will his stay in Kuya’s House finally give him the courage to take things on a another level with the girl he’s been dating?”

“Nichole is the daughter of TV host and celebrity, Phoemela Baranda. She was raised by her lola whom she fondly called ‘Mommy La,’ and didn’t become close to her mom until her grandmother passed away in 2009.

“She is a second year high school student at Colegio de San Agustin and is a part of the CSA Dance Troupe.  She moves her nose in a cat-like way a lot, a mannerism that she thinks she got from her mom. She always wanted to have a big brother.”

“Manolo is the youngest among 5 siblings. His parents run a business together. He is more open to his mom, while he loves jet skiing and going on hiking trips with his dad. He also plays basketball, frisbee and badminton.

“Although he studies in one of the most prestigious all-boys high schools in the country, he is very popular among girls from other schools. This year alone, Manolo went to 5 proms! Despite being a heartthrob, Manolo never had a girlfriend because he wants to focus on his studies first as his parents wish.”

“Joshua lives with his dad, stepmom and three half brothers. He regards his father very highly because he sees how his dad is very hardworking. His stepmom treats him as her own and he has a good relationship with his half brothers. He is a member of Batangas’ cultural dance group, Sining Kumintang. He used to be a ‘Campus Crush,’ but had to stop school on his 3rd year in high school due to financial instability. Apart from being a dancer, he also plays basketball and plays the guitar.”

“Loisa is part of a sing-and-dance girl group called ‘3G” that performs in mall shows and fiestas. She grew up in a close-knit family; second among 4 siblings. Her dad is a sales manager while her mom is a housewife.

“Even though she is NBSB (no boyfriend since birth), she prefers making friends with boys because she thinks girls have a tendency to be ‘plastic.’ She plays volleyball and dreams of becoming a flight attendant so she can go to different countries.”

“Besides music, Maris also excels in acting and in dancesport. She is admittedly still in love with her ex-boyfriend whom she had to break up with because her parents found out about their secret relationship. Will her stay inside the big and yellow house help her get over her lost love?”

“Chevin’s family story is that of riches to rags because of a failed business venture. He is supposed to be in his 1st year as an IT student in college, but didn’t pursue schooling anymore. He is now trying his luck in real estate sales.

“He has been single for the last three years because he is focusing on helping his family financially. He enjoys playing basketball with his brothers and friends during his free time.”

“Cess is the breadwinner of their family. Her dad is a tricycle driver while her mother is a housewife. She has two younger brothers, and she dreams of sending them to school some day.

“She’s a certified raketera who would take on any job just to support her family – from peddling soap and other beauty products to taking on bit roles on TV and commercials. Umubra kaya ang kanyang diskarte kay Kuya?”

“Because his father was an expat, Jacob grew up in Indonesia where he first discovered his gift of music. He was the drummer of a pre-teen band, one of the cool kids and enjoyed school life. When he came back to the Philippines, he had to make a big adjustment as he had difficulty speaking Tagalog.

“But eventually, he was able to make friends as he dabbled in musical theatre, film and now, Kuya has opened his door for Jacob. Will he finally find his place in the sun?”

“Jayme grew up in a conservative and religious family. She has two sisters and a brother. She’s very close to her mom but often consults her dad whenever she needs advise on anything. She loves to draw (mostly anime characters) and paint. She wanted to be a Fine Arts student but pursued a degree in Nursing because it is what her parents want for her.

“Michelle is a familiar face among volleyball fans. She’s a former star of the DLSU Lady Spikers, with an MVP award for Women’s Volleyball under her belt from the 75th UAAP Season. During her term in DLSU, she did not only deliver on the court, but was also a consistent Dean’s Lister until she graduated with a degree in Marketing Management.

“Fourth cooks for one of the restaurants in a 5-star luxury hotel in the country. He has a twin brother who’s also a part of PBB All In. Inside the house, he’s the more responsible twin, making him Kuya’s ‘Brad Bait.’ Besides his culinary skills, he also knows how to dance, sing and paint.

“He’s one of the voice talents for dubbed anime and asianovela programs. He can also impersonate the voices of Gary Valenciano, Janno Gibbs and Gus Abelgas. He has a girlfriend of two years.”

‘As his moniker suggests, Fifth is the more makulit twin. His twin brother is also a part of PBB All In.  He likes pulling pranks and used to make and upload funny videos online. Despite his antics, Fifth is business-minded. He owns a small hamburger stall, on which he is too focused to even have time for a girlfriend.

“Like his twin brother, Fifth can also sing, dance and draw. He can also do Doraemon voice impersonations.”

“Aina was born in Boracay and was raised there until her family moved to Geneva, Switzerland when she eight years old. She finished her studies there, and also tried to work as a hiphop teacher for kids. She recently moved back to Boracay on her own to try her luck out here, leaving her family and Moroccan boyfriend in Geneva.

“Aina knows how to swim like a mermaid after being trained in a mermaid school in Boracay.”

“The younger sister of one of the biggest Kapamilya Stars today, Alex recently made her comeback as a Kapamilya Star last year as a co-host for The Voice of the Philippines and as a regular on Banana Nite. Like her older sister, Alex is a triple threat who can act, host and perform on stage. But despite comparisons, Alex is still able to keep her individuality; veering away from her ate’s shadows, she is able to make a name for herself.

“In fact, this proves to be an even bigger year for Alex – taking on the challenge of co-hosting The Voice of the Philippines Kids with Luis Manzano, and joining the all-star set of hosts of PBB All In together with her older sister. But before she goes straight to hosting the biggest reality show on TV, Alex must face the challenge of being one of the housemates first! Kayanin kaya ng kikay powers niya ang mga hamon ni Kuya?”