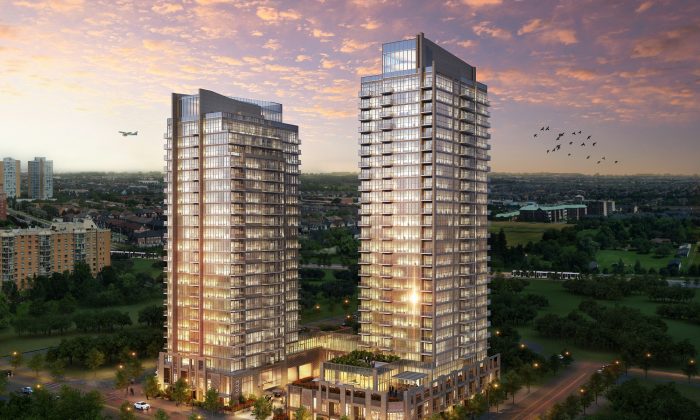 Pinnacle International has been a leading player in downtown Toronto’s burgeoning condominium scene over the past decade. And it will continue to be, with exciting plans ahead for the Toronto waterfront, the Entertainment District, and Mississauga.

After establishing itself as a builder of luxury condos, hotels, and commercial developments in Vancouver, Pinnacle arrived in Toronto more than a decade ago and has transformed Toronto’s waterfront into a master-planned, multi-phased condo development. Pinnacle Centre is now a vibrant community with 2,000 residential units in four towers at Bay, Harbour, and Yonge Streets. Pinnacle also built the Bellagio on Bloor in 2002, a building with classic architecture situated next to Yorkville, Rosedale, and Danforth Village.

The company expanded its horizons to Toronto’s Entertainment District at John and Adelaide Streets, with the Pinnacle on Adelaide and The PJ (Pearl and John) Condos that just launched recently. The 48-storey tower will sit atop a six-storey podium that will house a mix of retail, residential, and a luxurious sixth-floor amenity space with an outdoor pool and hot tub, party room, and fitness centre.

It has also initiated large communities in Mississauga with Pinnacle Grand Park 2 under construction in the city centre and Amber Condos, the fourth phase of the master-planned Pinnacle Uptown community at Hurontario and Eglinton.

Grand Park offers residents the option to walk to Square One, the Living Arts Centre, parks, trails, restaurants, and theatres, and is also convenient to Mississauga and GO Transit and many major highways. Pinnacle Uptown sits on a 36.5-acre site with extensive parkland, nature trails, and retail. It offers a mix of trendy condominium residences and executive townhomes but is still surrounded by nature.

Anson Kwok, Pinnacle International’s vice president of sales and marketing, has an intimate knowledge of how condos have transformed Toronto. He lives at Pinnacle Centre and is an “elevator commuter” who works in the same building where his condo suite is.

He says 2015 was a successful year for Pinnacle with strong sales of both pre-sale and inventory units, including larger two- and three-bedroom suites.

“That’s very positive,” he told the Epoch Times in an interview. “Toronto is not a city of just investors. There are a lot of families who want to stay downtown and a lot more second- and third-generation condo dwellers looking for larger spaces.”

Kwok is seeing a lot more people who, like him, don’t want to face long commutes and want to live in close proximity to where they work and play.

“It is becoming more common to have a person drop off their kids at a daycare at the base of their condo building, then walk to work. And if someone is moving downtown to start their career, their time is limited as they are likely working long hours,” he says.

“What excites me are the office developments coming to downtown,” adds Kwok. “Rather than all the discussions about the Gardiner Expressway or adding a relief line, the most immediate way to tackle some of the transportation issues is to have people living closer to where they work.”

He’s seeing a similar live/work/play trend at Pinnacle’s Mississauga projects, with people looking at how they can ease car dependency, whether it’s by using a car share service or public transit.

“It’s a lifestyle change, and in downtown Toronto it’s a norm to not own a car and either walk, bike, or use public transit. That’s where we’re seeing the influence of the next generation.” Kwok says.

Although interest rates are expected to increase later in 2016, he predicts that condo sales will continue to remain steady. Especially with the price gap between low-rise and high-rise continuing to grow, condos offer a great option for financial and lifestyle reasons. Kwok doesn’t expect as many new condo launches, but he says buildings are getting taller with more units, thus the cycle to build them is longer.

One of the most exciting projects on the books for Pinnacle is the master-planned community it plans to build at 1 Yonge, currently home to the Toronto Star (the existing Star building will be incorporated into the development). Plans are for a mixed-use development with five towers, with heights up to 95 storeys.

Kwok says the company is looking forward to “creating a dynamic community at the foot of Yonge Street.”