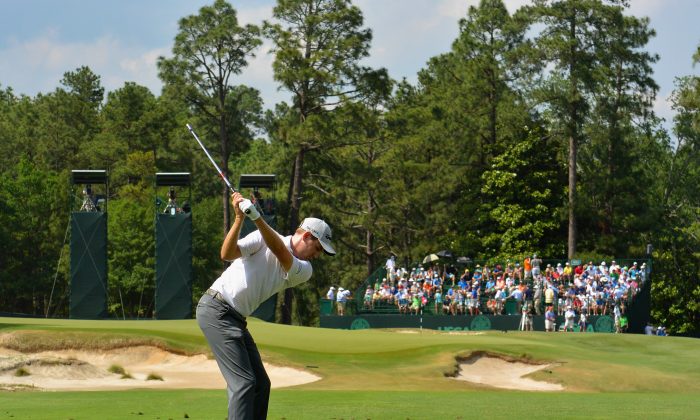 Brendon Todd of the United States hits his tee shot on the ninth hole during the second round of the 114th U.S. Open at Pinehurst Resort & Country Club, Course No. 2 on June 13, 2014 in Pinehurst, North Carolina. (Ross Kinnaird/Getty Images)
Golf

The other major story thus far is the manner by which Pinehurst #2 has been prepared. Unlike past Opens which routinely featured high rough grass off narrow fairways — the Donald Ross tour de force layout offers no usual rough but sand-packed areas with wispy grasses planted to provide the ultimate contrast between man-prepared areas for play and the natural terrain just off the fairways. Credit the design duo of Ben Crenshaw and Bill Coore, along with the ownership of Pinehurst — ClubCorp and the USGA — for bringing to life the Ross inspired slopes, contours and other unique vagaries that golf in the sandhills region can so uniquely provide.

Returning for the 3rd time in hosting America’s national championship since 1999 — #2 has shown how the elements of both the aerial and ground games are fundamental even at the highest levels of golf. What the set-up has done is allow players to demonstrate their considerable abilities and removed — at least for this year — the predictable boring pitchout from the rough routinely seen at past Opens.