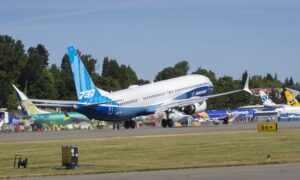 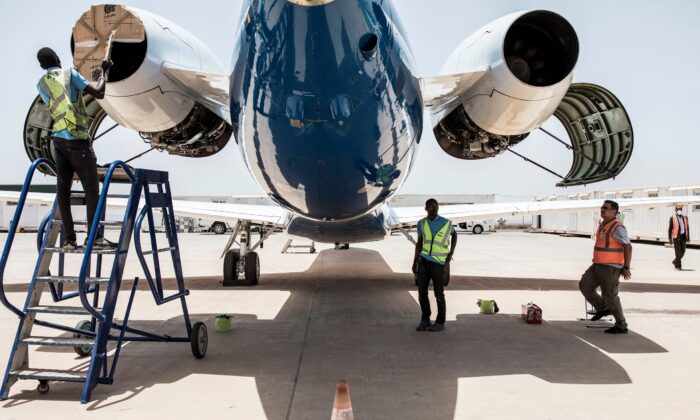 The Transair ground and engineering crew check and maintain their aircraft in Dakar on May 22, 2020. (John Wessels/AFP via Getty Images)
Crime and Incidents

Pilots Rescued After Cargo Plane Crashes in Ocean Off Hawaii

HONOLULU—A cargo plane made an emergency landing in the Pacific Ocean off the coast of Hawaii early Friday and both people on board have been rescued.

The pilots of the Transair Flight 810 reported engine trouble and were attempting to return to Honolulu when they were forced to land the Boeing 737 in the water, the Federal Aviation Administration said in a statement.

U.S. Coast Guard Lt. Commander Karin Evelyn said in an email that they received a report around 1:40 a.m. of a downed inter-island transport plane. About an hour later, rescuers in a Coast Guard helicopter spotted the debris field and two people in the water, Evelyn said.

One person was hoisted into the helicopter and taken to Queens Medical Center, Evelyn said. The Honolulu Fire Department rescued the other person, she said. Their identities were not immediately released.

Queen’s officials said a 58-year-old was in the intensive care unit in critical condition, according to Hawaii News Now. A boat brought the other 50-year-old to shore before being transported to the hospital in serious condition with a head injury and multiple lacerations, Hawaii News Now reported.

The plane debris remains, Evelyn said, and the Coast Guard will evaluate the pollution at first light.

According to the state Department of Transportation, the plane debris was found about 4 miles off Oahu, Hawaii News Now reported. The plane was flying from Honolulu to Maui.

The FAA and the National Transportation Safety Board will investigate. The NTSB said in a tweet that it will send a team of seven investigators.

The Boeing 737 first flew in the late 1960s and is the most popular airline plane still in production. Boeing has delivered more than 10,500 of them and has unfilled orders for about 4,000 more, almost all of those for the latest version of the plane, the 737 Max.

Over the years, about 200 737s have been destroyed in crashes and several hundred others have been involved in less serious accidents and incidents, according to the Aviation Safety Network database.

“For a jet that has been in production for so long and is being used so extensively, 203 hull-loss accidents can be considered a very good safety record,” said Harro Ranter, who runs the database. He said the plane’s accident rate improved dramatically from the first models to more recent ones that preceded the Max.

The plane involved in Friday’s incident is 46 years old. It is a much earlier version of the 737 than the Max, and U.S. airlines no longer use the older ones for passenger flights.

Boeing said in a statement: “We are aware of the reports out of Honolulu, Hawaii and are closely monitoring the situation. We are in contact with the U.S. National Transportation Safety Board and are working to gather more information.”

By Caleb Jones, David Koenig, and Michelle A. Monroe