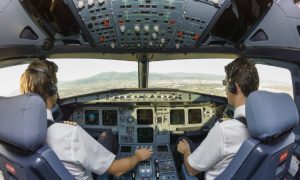 Pilot Tells Air Traffic Controller Pre-Crash He Has No Power

PLAINVILLE, Mass.—The pilot of a small plane that crashed into a Massachusetts home over the weekend, killing all three people on board, calmly told an air traffic controller he has no engine power and is gliding in the minutes before impact.

“Yeah, we’ve got problems with the engine, where’s the nearest airport?” the pilot says, according to audio of the exchange posted on the website liveatc.net.

The air traffic controller suggests returning to an airport seven miles behind the plane, but it becomes clear that the pilot of the Beechcraft BE36 aircraft is not going to make it.

“We have a real bad vibration, we’re losing engines,” the pilot says.

The air traffic controller tells the pilot to look for a highway to land on, suggesting nearby Interstate 495.

“We have no engines, I need help,” the pilot says, adding later, “we’re gliding.”

After a period of silence the air traffic controller says, “radar contact is lost.”

The plane had taken off from Lancaster Airport in Pennsylvania on Sunday and was headed to Norwood Memorial Airport in Massachusetts when it struck the roof of the two-story colonial-style home in Plainville and burst into flames. Four people in the home, including two children, escaped unharmed as the top floor of their home was engulfed.

The names of the people aboard the plane have not been released, but state police said one was a juvenile.

Homeowner Aaron Rice said his wife and two sons were upstairs when the plane hit, while he was on the ground floor.

“We heard a loud bang and saw a fireball come down the back of the house,” he said.

The mostly heavily damaged part of the house was his sons’ upstairs bedrooms, he said.

Investigators from the National Transportation Safety Board and the Federal Aviation Administration arrived on scene Monday.

Fighting the blaze was difficult because there are no fire hydrants in the neighborhood, Plainville Fire Chief Justin Alexander said. Several other area departments helped.

Neighbors reported hearing something amiss as the plane flew over the neighborhood.

Mike Brown told The Sun Chronicle he was outside barbecuing when he heard the plane, looked up and saw it start to bank. He said the engine sounded like it was sputtering and then heard a crash and saw smoke.