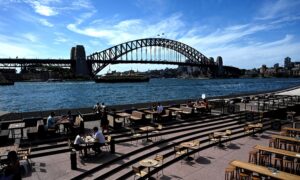 Aviation authorities are investigating after a pilot allegedly fell asleep and overshot the airport by nearly 30 miles.

According to the Australian Transport Safety Bureau (ATSB), the 5-seater passenger plane on a charter cruise had to turn around after missing the runway by 46 kilometers.

The incident occurred in Tasmania on Nov. 8 and came to light after local media unearthed the report.

Flight tracking data obtained by The Australian showed that the plane was on its seventh trip of the day.

The small double-propeller plan had flown from Davenport on Tasmania—an Australian island about the size of Ireland that lies just to the south of mainland Australia in the south pacific.

The Piper PA-31 was heading to an airport about 150 miles away on the much smaller King Island.

“During the cruise, the pilot fell asleep resulting in the aircraft overflying King Island by 46km,” the report reads. “As part of the investigation, the ATSB will interview the pilot and review operational procedures.”

The investigation will be completed by spring of 2019, according to the ATSB, which classifies it as “serious incident” of “flight crew incapacitation.”

The travel company, Vortex, declined to comment on the incident, according to the Daily Mail Australia, and had not responded to a request to comment from the Epoch Times at the time of publication.

According to their website, Vortex provides a “fly-in-fly-out experience” direct to tourist destinations in the area, including the surf breaks on King Island.

Modern technology allows pilots to hand over the controls to the autopilot within minutes of take-off, while they monitor for potential weather issues, turbulence, and consider adjusting altitude for passenger comfort.

With room for only one pilot, cat-napping on the 5-seater Piper PA-31 would appear to be in breach of regulations.

On larger passenger planes with more than one pilot, grabbing forty winks in the pilot’s seat is not only allowed, but recommended in some situations as a safety-enhancing maneuver, as long as stipulated regulations are followed.

Like many professions, pilots have to follow strict guidelines to combat potential fatigue. On long-haul flights, pilots and crew are required to take bunk rest in their own special sleeping compartment, where they can spend up to half of longer flights.

A survey in 2013 found that over half of pilots had fallen asleep while in charge of a plane. More worryingly, 29 percent said that they had awoken to find their co-pilot also asleep.

In the same survey, half of the pilots said that fatigue was the biggest threat to flight safety.

In 2009, passengers were shocked when FBI agents stormed their delayed Airbus 320 shortly after it landed in Minneapolis and rushed through to the cockpit.

Unknown to the passengers, the flight from San Diego had overshot the airport by 150 miles. Authorities had been unable to raise the pilots on the radio, and were preparing to scramble F-16 fighters for an interception as the aircraft flew into the neighboring state of Wisconsin.

Radio contact was finally made over an hour later.

The pilots said they were distracted because they’d been engaged in a “heated” discussion on airline policy.