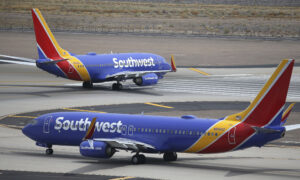 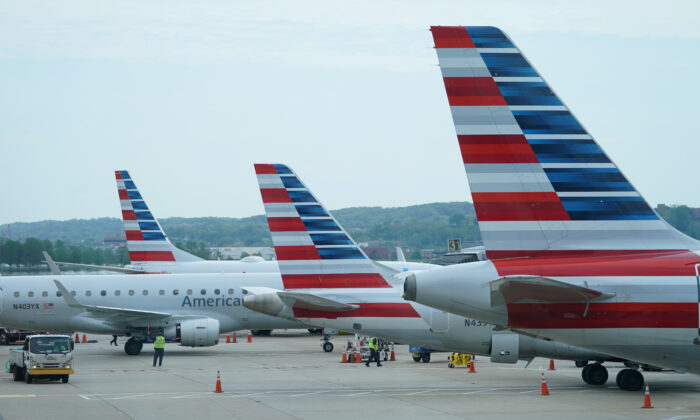 American Airlines jets made by Embraer and other manufacturers sit at gates at Washington's Reagan National Airport amid the coronavirus pandemic, in Washington on April 29, 2020. (Kevin Lamarque/Reuters)
Economy

An American Airlines pilot warned that a vaccine mandate announced last month by President Joe Biden may have a “catastrophic effect” on the transportation system and supply chain.

“If you have flights reduced by 30 percent because 30 percent of pilots are fired because they won’t take the vaccine, this is going to affect how your goods get here from overseas, how they are distributed to the store,” Yoder further said, adding that similar scenes are unfolding in other industries.

“The same thing is happening with the truckers, it’s happening in the shipping industry,” Yoder said. “Those Amazon boxes that typically show up in two days—you might be looking at three weeks.”

Going further, Yoder warned that pilots, truckers, and other transportation workers “have all the control” because it’s “going to affect your air travel and it’s going to affect the economy.”

The pilot’s claim came as Southwest Airlines canceled thousands of flights over the past weekend and on Monday. The Federal Aviation Administration and Southwest’s leaders have said that vaccine mandates were not the reason for the cancelations.

The airline’s massive cancellations over the weekend were not tied to any pilot protests over Southwest’s decision last week to mandate COVID-19 vaccines for all employees by Dec. 8 under an executive order signed by President Joe Biden, Southwest Chief Executive Gary Kelly told CNBC on Tuesday.

He said employee behavior had been “all very normal … It just takes several days to catch up.”

In June, Southwest canceled hundreds of flights because of a computer reservation issue. The prior day in June, Southwest reported a separate issue that required a ground stop after its “weather data provider experienced intermittent performance issues.”

“It’s been a rough summer and I’m not offering any excuses,” Kelly continued. “We definitely have some staffing challenges as well, so we have moderated our flight and accelerated our hiring plans.”

Kelly said that “like a lot of companies, we definitely are having some hiring challenges. We’re trying to get 5,000 people hired by the end of this year, we’re about halfway there.”