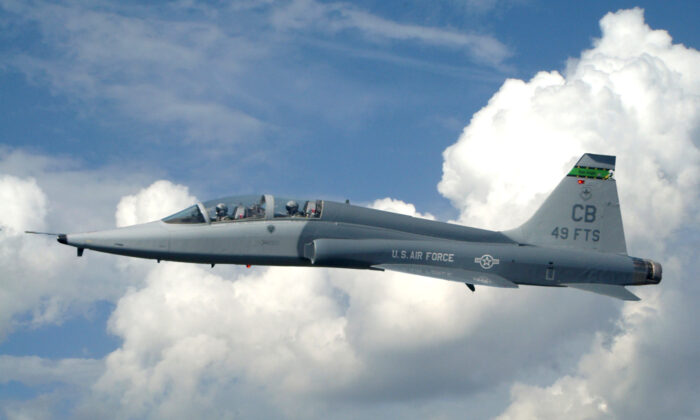 The T-38 Talon is a twin-engine, high-altitude, supersonic jet trainer used in a variety of roles. Air Education and Training Command is the primary user of the T-38C for joint specialized undergraduate pilot training. (Columbus Air Force Base/U.S. Air Force)
Crime and Incidents

A pilot was killed and two other people were injured on Friday after an accident involving two planes on the runway at the Laughlin Air Force Base in Del Rio, Texas.

The accident took place around 10:00 a.m. local time. The “mishap” involved two T-38C Talon trainer aircraft, according to a news release from the 47th Flying Training Wing at the air force base.

The base is located on the U.S.-Mexico border.

“Losing teammates is unbelievably painful and it is with a heavy heart I express my sincere condolences,” Col. Craig Prather, commander of the training wing, said in a statement. “Our hearts, thoughts, and prayer are with our pilots involved in this mishap and their families.”

According to the release, one of the injured pilots was treated a Val Verde Regional Medical Center in Del Rio, and was later released. The other pilot was evacuated by air to Brooke Army Medical Center in San Antonio, and is in critical condition.

Names of all the pilots involved in the accident have been withheld, pending 24 hours after their next of kin are notified.

“An investigation into the mishap is still ongoing,” the training wing said on Friday.