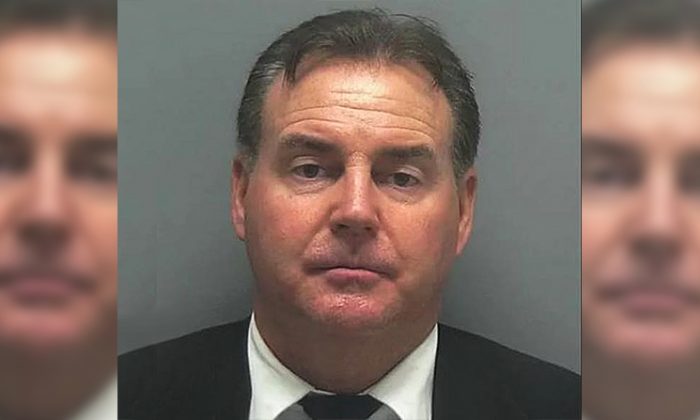 Pilot Brian Andrew Machtemes of Sun Country Airlines was arrested in Florida for trying to bring a loaded pistol onto an airplane, on Oct. 26, 2018. (Lee County Sheriff's Office)
US News

Pilot Arrested for Trying to Bring Loaded Gun Onto Airplane

A pilot from a Minnesota airline was arrested in Florida while trying to board an airplane with a loaded pistol in his luggage.

Brian Andrew Machtemes was scheduled to fly a Sun Country Airlines flight out of Southwest Florida International Airport in Fort Myers, Florida, around 6:50 p.m. on Oct. 26.

A Transportation Security Administration (TSA) agent examining the pilot’s luggage found a loaded pistol in a zippered pouch on the front his carry-on suitcase, News-Press reported.

The TSA agent called the police to the security checkpoint. The officer asked who owned the bag, and Machtemes admitted it was his, ABC  News reported.

Machtemes, 54, a Minnetonka, Minnesota, resident, told a Lee County Port Authority police officer that he had packed his own bag. At that point, Machtemes was placed under arrest.

Machtemes declined to speak with police, opting to remain silent and call an attorney. He was arraigned and given a Nov.26 court date, the Star-Tribune reported.

Sun Country Airlines spokeswoman Kirsten Wenker told the News-Press, “I can confirm he is a pilot for Sun Country.”

“In the interest of respecting the privacy of and preserving the trust of all our employees, we do not comment or confirm details related to individual employee conduct or work performance,” she said.

According to News-Press, Machtemes had a permit to carry the pistol, a .380-caliber KEL-TEC, in Michigan, but the permit was not valid in Florida.

Further, TSA regulations only allow passengers to bring firearms on planes if they are unloaded and stored in a locked, hard-sided case, and carried as checked luggage, not carry-on.

Pilots are allowed to carry firearms on the flight deck, to prevent hijackings or disruptions by unruly passengers. As with passengers, pilots can only bring firearms on board in locked, hard-sided gun cases, the Star-Tribune reported. This law has been in place since 2003.

Sun Country Airlines said that before its pilots can carry firearms in flight, they must undergo 56 hours of training. After the training, the pilot is deputized as a federal law enforcement officer and is issued a TSA-approved firearm and the attendant permits.

The airline would not confirm whether or not the pistol Machtemes was carrying was TSA-approved.

Brian Machtemes’s arrest was more than a personal inconvenience.

Another Sun Country spokeswoman, Victoria Moreland, told the News-Press that flight had to be rescheduled for Saturday because Sun Country did not have a replacement pilot at Southwest Florida International Airport.

Sun Country told the Star-Tribune that the company had to provide passengers with hotels, meal vouchers, and a $200 flight credit.