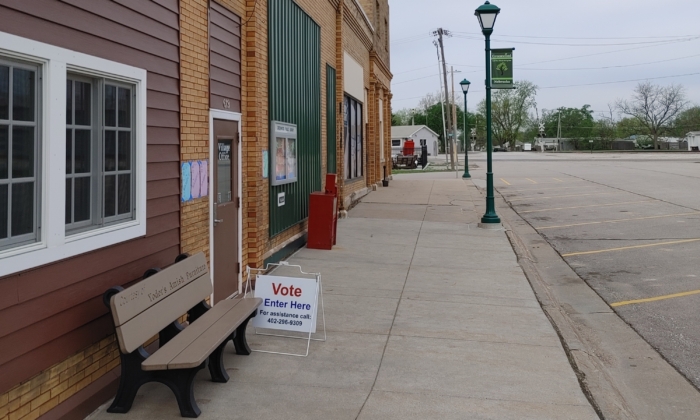 A sign directs voters to the polling place at the village office that also houses the library in the tiny village of Greenwood, Nebraska, for the primary election on May 10, 2022. (Jeff Louderback/The Epoch Times)
2022 Midterm Elections

With 63 percent of the precincts reporting at 10:58 p.m., Pillen generated 32.72 percent of the vote followed by Brett Lindstrom and Charles Herbster, according to Decision Desk HQ.

State Sen. Carol Blood (D) easily prevailed in the Democratic gubernatorial primary over Roy Harris, a little-known candidate who did not actively campaign.

In a victory speech, Pillen talked about how he never envisioned becoming a politician but did so because he loves public service and he loves Nebraska. He talked about growing up on a farm in Platte Center, Nebraska and learning how to pull a pig when he was 5.

“I was a kid who dreamed about playing football and becoming a veterinarian. Our mother taught us about the gift of ‘when.’ Not ‘if,’ but ‘when’ we would reach goals in life. I will make sure that every kid in Nebraska understands what ‘when’ means. We will never give up on our kids and invest the farm on our kids so they realize the grass is greener in Nebraska,” Pillen said.

The GOP primary featured six candidates. Pillen, Herbster, and Lindstrom were so bunched together in recent polls that many political pundits deemed the race too close to call heading into primary election day.

Nebraska Gov. Pete Ricketts (R) urged Trump to not endorse a candidate in the Nebraska gubernatorial race. When Trump ignored the request, Ricketts authored a scathing statement about Herbster and then declared his backing of Pillen, who was also supported by former Republican Gov. Kay Orr and legendary former University of Nebraska football coach Tom Osborne.

Herbster, a cattle producer who owns Herbster Angus Farms and has served as an agricultural adviser to Trump during his presidency was the frontrunner for several months until the landscape shifted on April 14.

That is when an article in the Nebraska Examiner revealed accusations that he groped eight women, including state Sen. Julie Slama (R), at political functions and fundraising dinners over several years.

Herbster has repeatedly and vehemently denied the allegations and filed a defamation lawsuit against Slama. The lawmaker responded with a countersuit that accuses Herbster of sexual battery.

On May 1, Trump held a rally in eastern Nebraska to support Herbster.

Pillen is a cattle producer who founded Pillen Family Farms and serves as a University of Nebraska regent.

Early results showed Lindstrom with a lead over Pillen and Herbster, but Decision Desk HQ analysts said that the eight-year state legislator eventually ran out of votes in counties that favored him.

It was speculated that Lindstrom could benefit from Democrats switching parties to vote in the Republican primary.

According to the Nebraska Secretary of State’s Office, the Republican Party has gained 8,425 registered voters in the last three months. Over the same period, Democrats lost 5,625 voters and Independents 2,631.

When Ben Nelson was reelected to a second term in 1994, he became the last Democrat to be elected as the governor of Nebraska.

Nebraska has 93 counties. Only two–Douglas, which is home to Omaha; and Lancaster, where the state capital of Lincoln is located–voted for Joe Biden in the 2020 presidential election. Omaha, which sits on the Nebraska-Iowa line, has a population of 480,871 while 291,082 call Lincoln home.

Pillen is expected to be favored over Blood in the November 8 general election.

On May 9, a day before the primary, Pillen appeared in a hangar at the Lincoln Airport to address supporters.

He was flanked by Ricketts, Orr, and Osborne.

Over the last several months, Herbster and Pillen have touted their conservative platforms. During his appearance at the Lincoln Airport, Pillen said he would end all abortions in Nebraska should the U.S. Supreme Court strike down Roe v. Wade.

Pillen added that he wants to run the state’s government like he operates his business.

“In business, we don’t start self-appointed budget increases. We always figure out how to do more with less,” Pillen said. “We have to continue that mantra and make sure that we have less government invasion and we spend less money so we keep more money.”