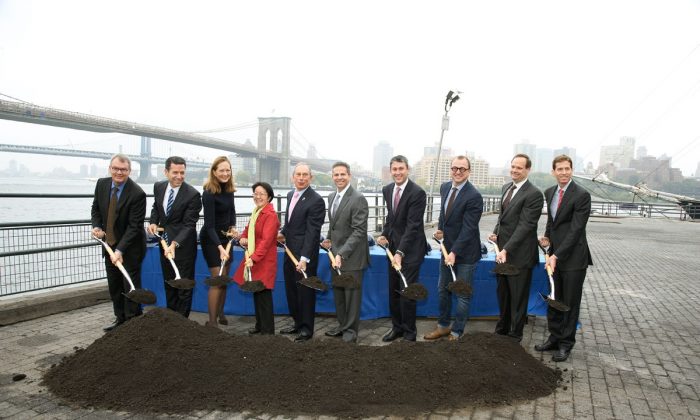 NEW YORK—Development of top waterfront real estate at South Street Seaport may finally go forward after years of delay. Howard Hughes Corporation (HHC) held a ceremony on Pier 17, Oct. 17 to officially break ground for a new glass building on the pier. The building will combine retail, dining, and a rooftop amphitheater. It is expected to open in early 2016.

“The best days are still to come for the seaport, and that great future really does start right here today,” said Bloomberg praising the design of the new structure. Bloomberg said the new development would infuse new life into the historic seaport district and at the same time save the city $100 million in cost for resiliency rebuilding at the pier.

David Weinreb CEO of HHC said the group worked with “community leaders, the land planning group, to come up with a design that would make sure that we opened up the property to the waterfront and to the Brooklyn Bridge.”

The planned glass structure will have massive 32 feet by 20 feet glass and steel doors that will open up the ground floor to the waterfront and remain open, as weather permits. The 1.5-acre roof will have a restaurant, two outdoor bars, and an amphitheater that will seat four thousand.

Gregg Pasquarelli with design firm SHoP said the group looked at the best pier designs around the world that brought together public space and buildings on the water. He said the design aims to create a “very contemporary version of a historic waterfront structure.”

Much of the local community has bemoaned the project as a danger to the historic district’s unique character. There is also concern that the project will open the gate for future development that could include at least one high-rise building.

Pier 17 has stunning views of the East River and Brooklyn Bridge. The area is currently the fifth largest tourist attraction in New York City, according to HHC.

HHC, which is leasing much of the area’s property from the city, has been in negotiation with the city since 2007. The publicly traded firm has characterized the Pier 17 project as one of its crown jewels.

Preparations for demolition of the current building have been underway since early September, when nearly all tenants had to be out of the building. Preparations will continue as HHC continues to battle an ongoing lawsuit brought by the now former tenants of the Pier 17 building. The suit alleges the tenants were over-charged for utilities in an attempt to encourage the tenants to vacate.

One final remaining tenant, food court retailer Simply Seafood, has refused to move out, citing a valid lease for its space through 2020. HHC is challenging the validity of that lease alleging that the ten-year renewal of the lease in 2010 was not valid.

With additional reporting by Genevieve Belmaker