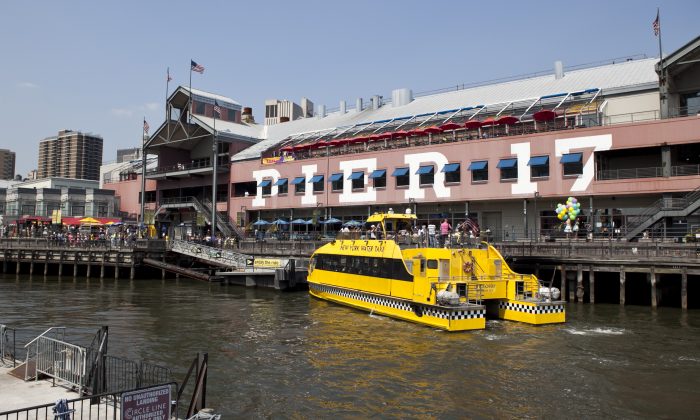 NEW YORK—The face of the largest historic district in Lower Manhattan may be on the verge of a multiphase development project, but little is known of the developer’s plans beyond the first phase.

The Howard Hughes Corporation (HHC) is set to transform South Street Seaport’s Pier 17 into a modern, glass structure that will increase open space on the pier and on the building’s roof.

Merchants in the current building must be moved out by Sept. 9, and demolition will begin on Oct. 1, according to Community Board 1 (CB1).

The renovation of Pier 17’s main building is expected to be complete in 2015, with new stores, restaurants, shops, and performance space.

Much of the local community has bemoaned the project as a danger to the historic district’s unique character. It is also concerned that it will open the gate for future development that could include at least one high-rise building.

The area is currently the fifth largest tourist attraction in New York City, according to HHC.

HHC, which owns much of the area’s property, has been in negotiation with the city since 2007. The publicly traded firm characterizes the Pier 17 project as one of its crown jewels.

Two persons familiar with the impending development, who asked not to be named, have characterized the project as a grave concern for business and residential community members.

One of the persons said that one of the most often expressed fears is development beyond the pier. HHC currently has the option to develop beyond its current project to include the Tin Building and the New Market Building, both of which border the pier, according to CB1.

According to a representative with the city’s Landmarks Preservation Commission, the 1939 New Market Building is not landmarked and is not designated as part of the South Street Seaport Historic District, so it has fewer protections. But the Tin Building is designated an historic landmark.

It’s details like this that have some advocacy groups concerned.

“It’s quite apparent that they have a much larger design, and they’re letting us in on it piecemeal,” said David Sheldon, a spokesperson for the community group Save Our Seaport (SOS). The group has been a harsh critic of the project, characterizing it as selling out an area that is already an extremely popular tourist destination.

“You can’t just gut the history of the city to sell things,” said Sheldon. SOS will hold a meeting on the evening of Aug. 28 to plan their next steps.

CB1, which oversees the district that the South Street Seaport falls within, will likely have more answers at its Sept. 17 meeting, when a representative from the HHC will present them with more detailed plans.

One major question, based on the history of the evolving plans, will likely be HHC’s current intentions.

A Dec. 12, 2011, letter from the New York City Economic Development Corporation to HHC and South Street Seaport Limited Partnership (a private company that owns some of the other buildings in the area) showed definitive plans on the part of HHC to develop far beyond the pier.

A copy of the letter, obtained from SOS, shows two versions of the document, one with several redacted sections that refer to a second stage of development after Pier 17 is completed, and the second a complete version.

The letter also states the intention to conduct “reconstruction of the Tin Building to consist of approximately 100,0001 gross square feet of space.”

When asked about whether plans for additional development of a hotel, mixed-use residential space, and the Tin Building have changed since the date of the letter, HHC refused to comment and asked for all questions to be emailed. As of press time, the company had not responded to the requested email inquiry and a follow-up phone call.