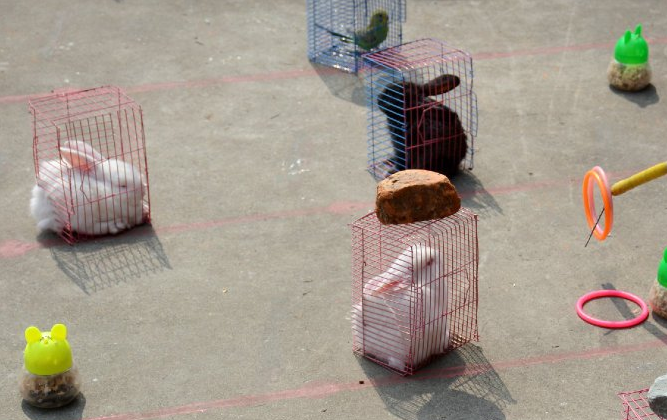 Normal variants of the game, in which players throw rings in hopes of looping them onto targets, feature dolls.

The controversial vendor works in Jinyanhu Park in the city of Chengdu. Dozens of animals—rabbits, turtles, parakeets, ducks—are crammed into tiny cages barely large enough to hold them.

Some of the cages have large stones placed upon them to prevent the animals from moving away in the direct sun.

“Playing this game won’t teach children anything about loving life…it’s too cruel. Even the lives of small animals deserve respect,” one user wrote.

Another thought of a direct solution. “We can save them from misery only by throwing loops around them.”

“We can’t do anything about it if others want to make money,” a more cynical opinion goes. “He’s not breaking any law. But can’t he put them in bigger cages?”

“I played this game once,” said another user, “to save a rabbit.”