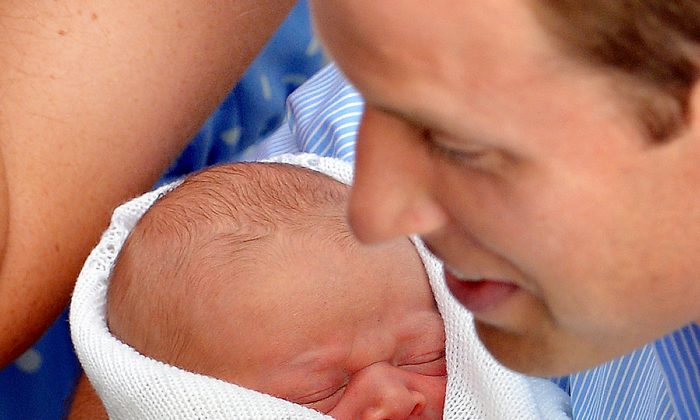 Prince William the Duke of Cambridge holds his new-born baby boy in front of the world's media outside the Lindo Wing of St. Mary's Hospital in London on July 23, 2013. The baby was born on Monday afternoon weighing eight pounds six ounces (3.8 kilogrammes). The baby, titled His Royal Highness, Prince (name) of Cambridge, is directly in line to inherit the throne after Charles, Queen Elizabeth II's eldest son and heir, and his eldest son William. (John Stillwell/AFP/Getty Images)
Photo Gallery

Well-wishers and a plethora of photographers greeted Prince William and his wife, Catherine, Duchess of Cambridge, as they left St. Mary’s Hospital in London on July 23, 2013 with a newborn boy. Here are some photos of that special moment in the life of new parents—taking their baby home for the first time—and of the unique moment of unveiling, so to speak, of a little baby who has attracted huge interest.

Also included are some vintage file photos of royal babies, including Prince William with his mother, Princess Diana bringing a newborn Prince Harry home from St. Mary’s Hospital, and a wee Prince Charles.