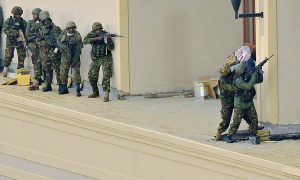 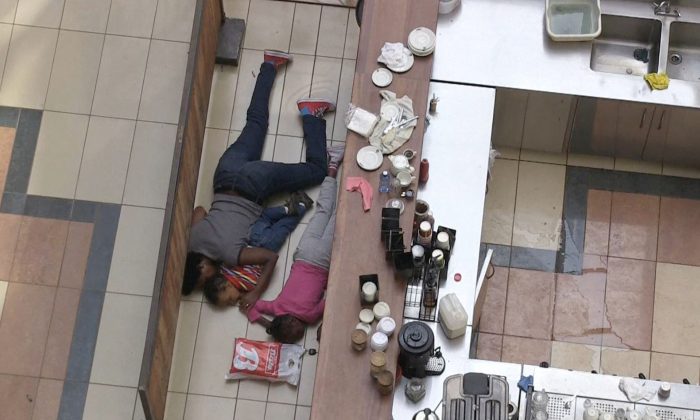 An image grab taken from AFP TV shows civilians, later identified as Faith Wambua and her children, taking cover behind a bar inside a shopping mall following an attack by masked gunmen in Nairobi on September 21, 2013. Masked attackers stormed the packed upmarket shopping mall in Nairobi, spraying gunfire and killing at least 72 people and wounding 175 before holing themselves up in the complex. The prolonged stand-off finally ended on Tuesday. (Nichole Sobecki/AFP/Getty Images)
Africa

Faith Wambua has been identified as the mother covering her son and lying next to her daughter in the Westgate mall attack, with people saying that she showed bravery in her actions.

Wambua and her two children all made it out safely from the harrowing situation, in which gunmen entered the Nairobi mall and began shooting dozens of people.

There are several different photos circulating of Wambua and her children taking cover in the mall.

Wambua and her children played dead when a man reached under the screen (in the picture on the left-hand side), unsure of whether he was a friend or foe. Eventually he convinced them he was a friend, and the three escaped with his help, shown in this Al Jazeera video. Friends on social media said that they were rescued after four hours.

People became further interested in Wambua’s story when Kenyan blogger Robert Alai tweeted out one of the pictures, asking “Who knows this brave mother?”

He later received information that it was Faith Wambua, who works at the World Agroforestry Centre, or ICRAF.

BEING TOLD: This brave mother is called Faith Wambua and she works at ICRAF. Wow!!! #WestgateAttack pic.twitter.com/lZNjpB50Ic

Her full name, according to her LinkedIn page, is Faith Wambua-Luedeling.

“In times like these, we have to celebrate courage of ordinary individuals like Faith Wambua,” said Alai.

In times like these, we have to celebrate courage of ordinary individuals like Faith Wambua. Putting a face to the struggle. #WestgateAttack

“She is a hero to her little ones and this pictures really bring tears to any parent to imagine being in this situation,” said Quinter Odhiambo.

Wambua “truly” showed “mother’s love” by making sure her two children were safe, said Collins Oundo via Facebook, who added that Wambua was one of five Kenyans who especially made him proud during the Westgate attack.

“Nothing can be compared to motherly love absolutely nothing, God bless that mother and all mothers,” said Nya K’aruoth on Facebook.

“She calmed her children and covered her son’s ears in the second picture not to hear the gun shots that would fill him with terror,” said Anjeline Okola on Facebook. “Faith, may you never lack a thing and may you and the children always enjoy peace. Bless you indeed!”

“I am moved at how the mother protected the child. I hope them managed to escape from the Westgate attack!” said Lee Makwiny on Facebook. “I have more reasons to love my mother and the mother to my son!!”

Thanking God that my friend Faith Wambua and her kids came out safely. My heart skipped a beat when I saw a pic of her daughter online!