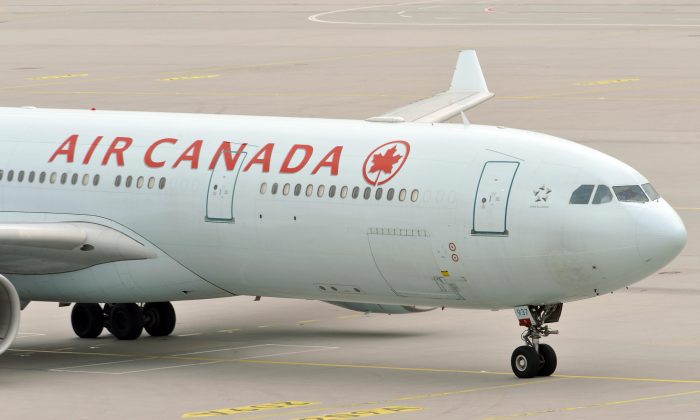 File photo of an Air Canada plane arriving at the international airport in Munich, Germany, on Aug. 3, 2009. (Joerg Koch/AFP/Getty Images)
US News

Dozens of people were slammed against the ceiling of an Air Canada flight over the Pacific Ocean on July 11.

The flight was forced to make an emergency landing in Hawaii after 37 people were injured, including nine seriously, reported The Associated Press.

The turbulence sent people into the aisle and slamming into the overhead compartments on the jetliner.

“The plane just dropped,” passenger Stephanie Beam told AP. “When we hit turbulence, I woke up and looked over to make sure my kids were buckled. The next thing I knew there’s just literally bodies on the ceiling of the plane.”

In all, 30 people were hospitalized.

Courtesy: William Say. Look at damage to roof of #AirCanada flight 33 after reports of passengers hitting the ceiling. It was diverted for emergency landing in Honolulu. 37 injured. Flight resumes noon today #emergencylanding pic.twitter.com/MOrny0HQyI

Andrew Szucs, who is from Ontario but now living in Sydney, said he was not injured.

“Then all of a sudden the plane dropped and went sideways,” Szucs said.

#aircanada Intense turbulence injured many people on Air Canada on route to Australia passengers on board hit the roof & everything fell down.The plane made an emergency landing in Honolulu.God saved them otherwise it would have been Black Friday. pic.twitter.com/iDyvCPldXu

He told AP that the pilot said via the radio that they didn’t see any turbulence on the radar and could see “no warning this kind of air drop was going to happen.”

Sandy Marshall of Sydney, meanwhile, said she was injured. Her children were unharmed.

“I didn’t have my seat belt on at the time. My child was sleeping on me, and I went straight up into the ceiling,” she said.

Another passenger, Jess Smith, told KHON that “we all hit the roof and everything fell down … People went flying.”

“I saw the people ahead of me hitting the overhead baggage compartments and then just slamming back into their seats,” Macdonald said.

“The whole experience was probably 10 to 15 seconds, a bit of mild shaking, nothing out of the ordinary, and then just a drop out of nowhere,” she said. “[It] was just a bunch of noise, people extremely shocked, and then a very eerie stillness throughout the cabin as people tried to grasp what had happened,” said Macdonald.

Macdonald was wearing a seatbelt and wasn’t hurt.

The Australian country band Hurricane Fall also was on board. Its lead singer Pepper Deroy suffered nerve damage in his forearm and elbow, said the group on Facebook.

“After being treated on the tarmac and then a follow up in hospital he’s got the Thumbs Up, we are all super grateful to the AirCanada staff for their professionalism and swift response,” the band said.

The turbulence occurred at an altitude of around 36,000 feet about 600 miles southwest of Honolulu, said the Federal Aviation Administration to AP.