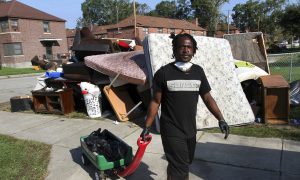 South Carolina officials have identified the fifth-grade girl who died after a classroom fight as Raniya Wright.

The Colleton County Coroner confirmed the 10-year-old’s death on March 27 after an incident at school on March 25. She died at the Medical University of South Carolina, NBC News reported.

She sustained fatal injuries in a classroom at Hills Elementary School in Walterboro, said the Colleton County Sheriff’s Office, which added that an assault is under investigation.

“The Colleton County School District has learned from law enforcement officials that the student transported to the Medical University of South Carolina passed away on March 27 at 9:39 a.m.,” the school district stated in confirming the little girl’s death, WLTX reported.

“We are devastated by this news, and we want our communities to keep their thoughts and prayers with the student’s family at this time,” the Colleton County School District said in a statement. “CCSD officials continue to focus on providing needed support services to our students, teachers, staff, and community.”

School officials said that after the fight was ended, they called emergency medical services to the school after Raniya was injured. Another student was suspended in the incident, the school said.

A 10-year-old girl who was injured during a fight at her elementary school has died.

The school district also said it is suspending its Facebook page “so we can better focus on providing the care that our stakeholders need at this time,” without elaborating, according to WLTX.

The identity of the other student has not been disclosed. Details about the fight have not been released.

The Colleton County Sheriff’s Office told GreenvilleOnline: “We are still unable to disclose any information regarding this incident due to this being an on-going investigation.”

Meanwhile, Raniya’s cause of death has not been disclosed. Richard Harvey, Colleton County Coroner, told ABC4 that an autopsy is scheduled for March 29.

School district spokesperson Sean Gruber issued a statement on the afternoon of March 27, saying that “Raniya was a wonderful student,” ABC News 4 reported.

The statement read, “She loved to write, spend time with her friends, play basketball and loved being a big sister. She was actively involved in her church as a junior usher. She will be missed greatly by her family, friends, and the entire school community.”

My statement on the passing of a student this morning in Colleton County: pic.twitter.com/8wsKCqt7Mf

A GoFundMe page was set up to the help girl’s family. “Sending our condolences to the family at this time Family lost there babygirl this morning,” the page said.