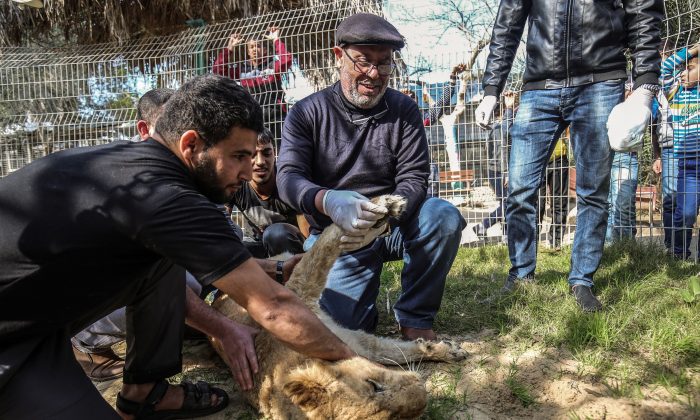 Palestinian veterinarian Fayyaz al-Haddad holds the paw of the lioness Falestine after being declawed at the Rafah Zoo in the southern Gaza Strip on Feb. 12, 2019. (Said Khatib/AFP/Getty Images)
Middle East

Pictured: Lion Gets Claws Removed So Visitors Can ‘Play’ With Her

New pictures show people playing with a lioness after it was declawed, prompting criticism from some.

Animal workers at Rafah Zoo in the Gaza strip blindfolded the lion as a veterinarian clipped off her claws with a pair of shears two weeks ago.

On Feb. 12, the vet sewed up the wounds and clipped the claws down further.

Workers were then photographed playing with the 14-month-old lioness as visitors watched.

“I’m trying to reduce the aggression of the lioness so it can be friendly with visitors,” Mohammed Jumaa, 53, the owner of the zoo, one of the few in Gaza, told AFP.

Fayez al-Haddad, the vet who operated on lioness Falestine, said the procedure was done so visitors could interact directly with the beast.

“The claws were cut so that they would not grow fast and visitors and children could play with her,” he said. “We want to bring smiles and happiness to children while increasing the number of visitors to the park, which suffers from high expenses.”

A number of photographs show children watching as adults play with the lioness but none show the children themselves inside the enclosure or playing with her.

At least one child did touch the lioness. Anas Abdel Raheem, 12, said that he played with her. “I am happy because I played with the lion and it did not bite me or tear my clothes,” he said. “My friends saw the pictures I posted on Facebook and WhatsApp.”

“For big cats, removing the claws is a particularly vicious procedure, which causes long-lasting damage,” a group called Four Paws said in a statement sent to the Daily Mail. “Natural behavior, such as grabbing food or climbing, is hardly possible without an animal’s claws. Since the amputation was not done in a proper vet clinic, the chance of infection is high.”

Removing a lion’s claws is the equivalent of amputating the fingers of a human, the group said, calling the procedure in a Facebook post “brutal mutilat[ion].”

Four Paws said that the Rafah Zoo, which opened in 1999, should be shut down because of its deplorable conditions, noting that four newborn lions recently froze to death there.