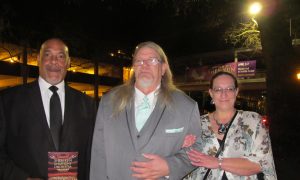 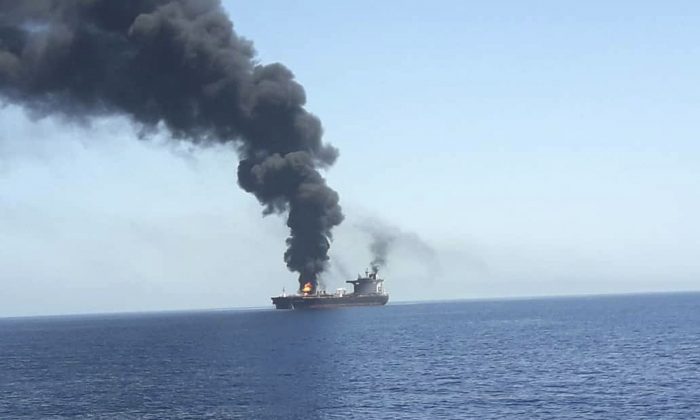 In this photo released by state-run IRIB News Agency, an oil tanker is on fire in the sea of Oman on June 13, 2019. (IRIB News Agency via AP)
International

Two oil tankers, the MT Front Altair and Kokuka Courageous, were rocked by explosions and fires in the Gulf of Oman near the Strait of Hormuz on June 13.

Sailors were forced to evacuate in the latest incident involving tankers amid rising tensions between the United States and Iran.

The U.S. Navy said it rushed in to assist the damaged vessels, but it didn’t offer an explanation as to what caused the damage to the Kokuka Courageous and MT Front Altair. There were reports, including one from Reuters, that at least one was hit by torpedoes, and the other was hit by a magnetic mine.

Photos showed the Front Altair on fire in the waters of the gulf. A source told Reuters that the explosion may have been caused by a magnetic mine, but Taiwan’s state-owned petrol company told The Telegraph that it was “suspected of being hit by a torpedo,” adding that the ship was on fire.

The Front Altair was “on fire and adrift,” maritime intelligence firm Dryad Global told Sky News. It’s not clear what will happen to it.

Meanwhile, international shipping association BIMCO indicated that both the ships may have been damaged by mines, Sky reported.

Dramatic images from the huge oil tanker that has reportedly been torpedoed in an attack off the coast of Iranhttps://t.co/eDhsLjo3Dv pic.twitter.com/pKWRrsxWXr

“Following two attacks on member vessels this morning, I am extremely worried about the safety of our crews going through the Strait of Hormuz,” Intertanko chairman Paolo dAmico told Sky.

He added that about 30 percent “of the world’s (seaborne) crude oil passes through the straits” in the region. “If the waters are becoming unsafe, the supply to the entire western world could be at risk,” he added.

The Japanese-owned tanker was also abandoned. The firm that chartered the ship said a suspected torpedo hit the vessel.

As a result of the incident, oil prices jumped by about 4 percent.

A U.S. Navy spokesman also suggested that it was an attack. “We are aware of the reported attack on shipping vessels in the Gulf of Oman. US Naval Forces in the region received two separate distress calls at 6:12 a.m. local (Bahrain) time and a second one at 7:00 a.m. US Navy ships are in the area and are rendering assistance,” the spokesperson said, according to the newspaper.

Meanwhile, an unnamed American defense official told CBS News that it was “highly likely Iran caused these attacks” on Thursday. Iran’s state-run media claimed that Tehran rescued the crew members of the stricken ships, but the official said it was  “patently false,” adding that the USS Bainbridge picked up 21 crew members.

Iran also issued a statement, suggesting that it wasn’t behind the attacks.

“Iran is concerned by the suspicious events around commercial tankers related to Japan,” Foreign Ministry spokesman Abbas Mousavi was quoted as saying by Bloomberg News. “We see this as going against efforts from within the region and beyond to reduce tensions.”