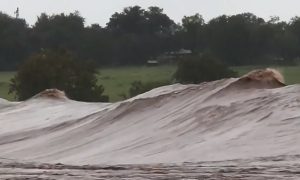 Pictured: 14-Year-Old Houston Boy Who Was Allegedly Stabbed Over a Brownie

The 14-year-old Houston student who was allegedly stabbed by a classmate over a brownie has been identified.

The victim was identified as Brian Angel. Last week, the Houston police announced that he died after being stabbed in the head by a classmate.

Police have not identified the suspect, saying he’s also 14 years old. He was charged as a juvenile with aggravated assault, reported ABC13.

Awful – Brian was stabbed in the EYE

In the incident, he walked across Bellaire Boulevard to a convenience store, and officials said there was an argument with a classmate.

“It was over a brownie,” Brian’s friend told ABC13. “It was ridiculous. I think that (other) kid was not healthy mentally and caused him to pull out his knife and cut him,” said Sergio Munoz.

He said the victim was outgoing and generous, adding that “he didn’t deserve what happened.”

“I don’t understand why this tragedy happened, and I have so many questions for God.”

Posted by Chron.com from the Houston Chronicle on Monday, 11 March 2019

Meanwhile, a GoFundMe account was set up for funeral expenses for the boy.

The Houston Independent School District issued a statement, saying, “We are heartbroken to learn that our student has passed away. We offer our deepest condolences to his family, friends and all who loved and cared for him. We had counselors available at Jane Long Academy this week to offer emotional support to students and staff and they will return after Spring Break.”

UPDATE: sadly, the 14-year-old stabbed on Wednesday (March 6) at 6436 Bellaire Boulevard has died. No other information is available at this time. The original news release on this case can be found here ===> https://t.co/KWXTOBbeB7 #hounews

Principal Keri Wittpenn said she learned about the stabbing on her way out of a doctor’s appointment for her newborn son.

“I sat and wept, trying to understand why one of our students didn’t come home safely and, as a new mom, how to cope with the death of a child,” Wittpenn told the Houston Chronicle. “I kept thinking how unfair it was that you sent your son to school and he did not arrive safely home. I don’t understand why this tragedy happened.”

“Police are investigating an occurrence that took place off-campus, after dismissal (Wednesday) near Jane Long Academy that resulted in a student being seriously injured. Counselors will be on campus (Thursday) to offer support and guidance to students,” said the Houston Independent School District to Click2Houston.

Anyone with information about the case is urged to call 713-222-TIPS.

In Texas, according to the FBI, the violent crime rate rose in 2017, reported the Texas Tribune.