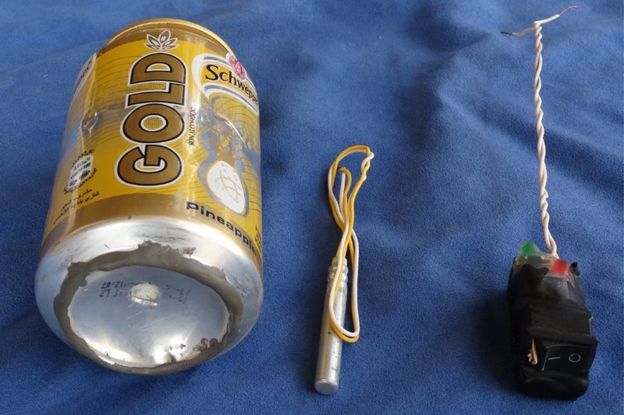 ISIS Claims Soda Can Bomb Took Down The Russian Plane

The Islamic State apparently posted an image of the “bomb” that was used to take down a passenger plane over Egypt’s Sinai Peninsula, which killed all 224 people on board a few weeks ago.

The photo, which appeared in ISIS publication Dabiq, is of a Schweppes Gold soft drink can and what appeared to be a detonator and switch for an improvised explosive device. An additional photograph showed passports belonging to Russian passengers who were killed in the incident, RT.com reported. The authenticity of the photos haven’t been verified by officials.

“The divided Crusaders of the East and West thought themselves safe in their jets as they cowardly bombarded the Muslims of the Caliphate,” the ISIS magazine said, referring to Russia, the United States, and the West. “And so revenge was exacted upon those who felt safe in the cockpits,” it added, reported Reuters.

The Russian Federal Security Service said that the plane was downed via a terrorist attack. The Airbus A321 plane was heading from a Red Sea resort to St. Petersburg, Russia.

“During the flight, a homemade device with the power of 1.5 kilograms of TNT was detonated,” FSB chief Aleksandr Bortnikov told RT.com on Nov. 17. He added that “traces of a foreign-made explosive substance” were discovered.

Some experts expressed skepticism that the device seen in the Dabiq publication was behind the plane crash. Norman Shanks, who was the former head of security for BAA and Heathrow, told The Guardian that the device probably would have been much, much larger to yield a blast of 1kg of TNT.

“I imagine that the Russians are now looking again at the passenger and crew manifest to see if there are any connections, but I personally have doubts. It wouldn’t surprise me if this was being put out to cover up how they got the actual device in,” he told the Guardian.

Western governments have also said a bomb likely brought the plane down. An ISIS-linked group on the Sinai Peninsula initially claimed responsibility.

Moscow has offered a $50 million reward for information on the plane attackers.

According to Russian language newspaper Kommersant, investigators with FSB on Wednesday discovered a 3-foot-wide hole in part of the plane’s fuselage.