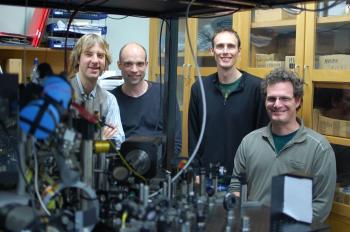 A major physics breakthrough by New Zealand researchers has brought the reality of next-generation ultra-fast quantum-logic computers a step closer.

Scientists have developed a technique to consistently isolate and capture a fast-moving neutral atom, according to a press release from Otago University. The atom was not only observed, but in a world first, the researchers were also able to photograph it.

“It has been the dream of scientists for the past century to see into the quantum world and develop technology on the smallest scale—the atomic scale," said team leader Dr Mikkel Andersen, according to Scoop.

Atoms are minuscule—10 billion lying side by side would approximate a metre. And moving at the speed of sound, they are hard to manipulate.

Laser cooling technology was used by the team of four to effectively slow a group of rubidium 85 atoms. At this point, "optical tweezers," or a laser-beam, was used to isolate and hold one atom which was then photographed through a microscope.

The researchers proved the production of individual trapped atoms was constant and dependable, which has opened the door to using the potency of atoms for complex information-processing tasks by next-generation quantum-logic computers.

Quantum computers could be able to break secret codes and simultaneously carry out numerous long and complex calculations.

“Our method provides a way to deliver those atoms needed to build this type of computer, and it is now possible to get a set of ten atoms held or trapped at the one time, said Dr Andersen.

Outperforming existing computers doing certain tasks requires a quantum computer built from a set of 30 atoms—a goal which is not far away.

“What we have done moves the frontier of what scientists can do and gives us deterministic control of the smallest building blocks in our world,” Dr Andersen explained.