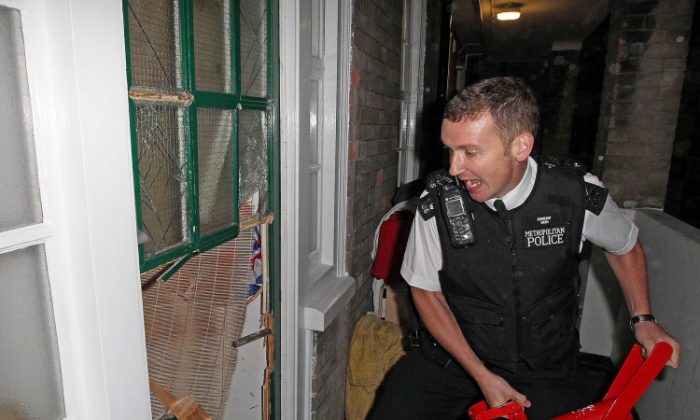 A Metropolitan police officer breaks down a door in a raid on a house in connection with the riots in London in August 2011. Extreme physical exertion can impair an officer's memory of an event, according to a new study. (Nigel Howard/AFP/Getty Images)
Science

Chasing down or grappling with a criminal suspect for just one minute is enough to impair a police officer’s memory of events, according to a new U.K.-led study.

By studying the effect of bursts of all-out physical exertion on memory, recognition, and awareness of environment in a group of Canadian police officers, the researchers found that recall of details of an incident was impaired in officers who had engaged in intense physical exertion.

Lorraine Hope of the U.K.’s University of Portsmouth says that the results of this study should be taken seriously by police officers, police chiefs, and the courts.

“Police officers are often expected to remember in detail who said what and how many blows were received or given in the midst of physical struggle or shortly afterward. The results of our tests indicate it may be very difficult for them to do this,” she said in a statement.

“The legal system puts a great deal of emphasis on witness accounts, particularly those of professional witnesses like police officers. Investigators and courts need to understand that an officer who cannot provide details about an encounter where physical exertion has played a role is not necessarily being deceptive or uncooperative. An officer’s memory errors or omissions after an intense physical struggle should not unjustly affect his or her credibility.”

In a state of physical exhaustion, the ability of the brain to process information is affected, say the researchers.

“As exhaustion takes over, cognitive resources tend to diminish. The ability to fully shift attention is inhibited, so even potentially relevant information might not be processed. Ultimately, memory is determined by what we can process,” Hope explained.

Hope collaborated with experts from the Metropolitan Police and the Force Science Institute in America to conduct the study. Fifty-two police officers with an average of eight years in the police force volunteered to take part in the study, which was carried out in Winnipeg, Canada.

The officers were asked to participate in a test based on a real-life policing scenario. The volunteers were paired up and were first briefed about a recent spate of armed robberies in the city, including details of witness descriptions of the perpetrators.

One of the pair then had to attack a heavy hanging water bag, using punches, kicks, and other strikes, until he or she no longer had the strength to continue. The other just observed.

Following this, each officer had to approach a mock-up of a trailer where a “known criminal” was suspected of living. On the way, the officer passed another individual. Once inside the trailer, a number of weapons, including guns and knives, could be seen to be in easy reach. The criminal then emerged from one of the rooms and shouted aggressively at the officer. Afterward, the officers were tested on their memory about the operation.

Hope found that the officers who had previously physically exerted themselves were unable to remember as much detail about the criminal, and made more recall errors compared to those who had just been observers. They were also half as likely to identify the criminal in a lineup.

Only about one-third of the exerted officers remembered seeing a person on the way to the trailer, whereas almost all the non-exerted officers could recall at least one descriptive item about the person.

The ability of the exerted officers to assess threatening aspects of the scene was not impaired, however, compared to the non-exerted officers, with both groups reporting seeing the same number of weapons.

This could mean that, in exerted individuals, brain resources are being diverted to risk assessment, rather than to remembering details about the situation and criminal suspect, the researchers reported.

The study was published online in the journal Psychological Science on March 7.