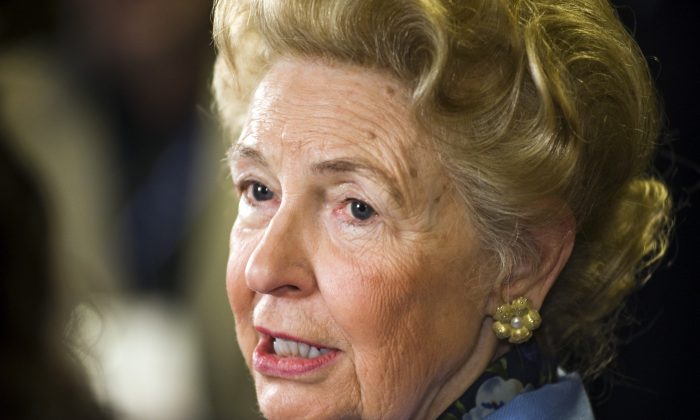 A retired American lawyer and activist has made news by declaring Republican frontrunner Donald Trump to be the “last hope” for America.

In a recent interview, Phyllis Schlafly was asked whether she thinks Trump is indeed the “last hope for America.”

“He does look like he’s the last hope. We don’t hear anybody saying what he’s saying. In fact, most of the people who ought to be lining up with him are attacking him. They’re probably jealous of the amount of press coverage he gets,” the 91-year-old told World Net Daily.

“But the reason he gets so much press coverage is the grassroots are fed up with people who are running things, and they do want a change. They do want people to stand up for America. It really resonates when he says he wants to ‘Make America Great Again.'”

Schlafly predicted Trump will win the Republican nomination because grassroots voters are outraged over “betrayals” such as the omnibus spending bill.

Her comments came after Trump denounced the bill.

“If anyone needed more evidence of why the American people are suffering at the hands of their own government, look no further than the budget deal announced by Speaker Ryan. In order to avoid a government shutdown, a cowardly threat from an incompetent President, the elected Republicans in Congress threw in the towel and showed absolutely no budget discipline,” Trump said.

“The only special interest not being served by our government is the American people. It is time we imposed budget discipline by holding the line on spending, getting rid of waste, fraud and abuse, and by taking on our debt. To do these things, we need a President who can lead the fight to hold Congress and the rest of government accountable. Together, we will Make America Great Again.”

She also thinks that Trump can win over some Democrats and ultimately win the election.

“They are betrayed,” she said. “There’s no doubt about it. The working man and woman have been betrayed by both parties. They’re ready for a change … anything they think would be better.”

Trump responded quickly to the comments, saying on Facebook: “Thank you Phyllis!”