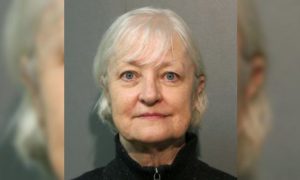 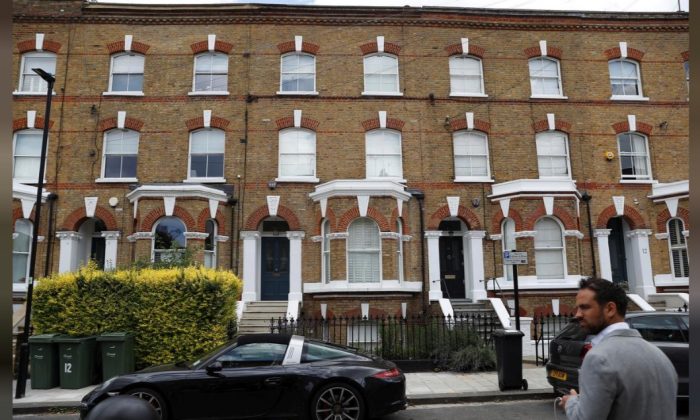 General view outside a house where the body of a suspected stowaway fell into the back garden from a plane flying over southwest London on July 2, 2019. (Peter Nicholls/Reuters)
UK

Shocking photos have surfaced showing the impact crater in the lawn of a London home where a body hit the ground after plummeting 3,500 feet from a plane.

Authorities believe the body belongs to a stowaway, according to the British news outlet Metro. It dropped from a Kenya Airways plane as it approached Heathrow Airport to land on Sunday, June 30, according to reports.

“How desperate must the poor person be to take such a risk?” wrote one commenter. “How awful I feel for the guy sunbathing that’s a nasty shock,” wrote another.

Someone else worried about lax airport security, saying: “If a person managed to get aboard the plane a bomb could just as easily be stowed. The security needs to be looked at, how did he get through onto the runway in the first place??!”

LADbible posted the story on its Facebook page, where it also garnered many comments.

“My sympathies to the family and friends of the deceased,” one person wrote. “To the deceased person, I’m so sorry for you, what a horrible way to die.”

Some people wondered whether the individual was dead before he hit the ground.

“He was dead probably within a couple of hours of take off,” a commenter offered. “At 18k feet you would have trouble breathing, at 25k you will fall unconscious as your lungs cannot get air and by 30k you will be experiencing -60C plus, so yes, you’d be frozen to death.”

Shocked residents summoned the police to an address in Clapham, south London, at 3:39 p.m. Sunday, The Telegraph reported, moments after the body hit the ground. The body, believed to belong to a male who has not yet been identified in reports, landed several feet away from a tenant who had been sitting in the garden.

Pilot Rescued From Plane That Crash-Landed Atop Idaho Tree

A local resident, who asked not to be named, told The Telegraph: “I heard a ‘whomp’—I went upstairs to look out of a window. At first, I thought it was a tramp asleep in the garden.

“He had all of his clothes on and everything. I had a closer look and saw there was blood all over the walls of the garden.

“I realized immediately that he had fallen,” the neighbor added.

Metro reported the man sunning in the garden as the body landed right beside him was “very shaken.”

A friend of the tenant told The Sun: “He was so lucky not to be hit and killed. The impact obliterated the body.”

The friend, who was inside the property at the time, added: “He didn’t even realize what it was to begin with. He was asleep and then there was a huge impact.”

The Sun identified the sunbather as John Baldock and reported he was so traumatized following the incident that he was “unable to speak.”

“This lad was very lucky not to be hit and I’m sure he will need counselling after that close call and seeing such a horrific scene,” one commenter wrote on The Sun’s Facebook post.

“That’s so shocking the last thing you expect to happen out in your garden,” someone else wrote. “Shocking for him and sad for whoever poor person was who fell.”

‘Happens Once Every Five Years’

A plane spotter who was following the flight on an app, was cited by The Telegraph as saying that if the stowaway had fallen several seconds later, he likely would have landed in a park “where there were hundreds of people.”

“I spoke to Heathrow,” the spotter added. “They said this happens once every five years.”

He also said the reason the man’s body was largely intact “because it was an ice block.”

According to The Star in Kenya, the stowaway was hidden in the undercarriage of the aircraft. Police found a bag containing food and clothing at the rear of the left landing gear.

“On Sunday, June 30, a body of a yet to be identified male stowaway landed in a garden in the Borough of Lambeth, south London, suggesting the stowaway was hidden in the undercarriage of the aircraft,” the statement from the airline said, reported the Tuko news website.

The body of a Kenyan Man has fallen into the BACK GARDEN of a LONDON home.
Metropolitan police were called by the home owner and on investigations it was found to have fallen from the undercarriage of Kenya Airways flight 100 from NAIROBI to LONDON. pic.twitter.com/ZvXGWANSrb

According to the Star, police in the United Kingdom are in contact with Kenyan authorities to identify the person. No damage was done to the aircraft, and it was cleared for operation.

Reason not to live under a flight path

The body of a suspected stowaway fell from a plane shortly before it landed at #Heathrow Airport.

The man’s body landed in a garden in Clapham, south London at 3.41pm on Sunday, https://t.co/aWuUo2ft8t

A statement from Scotland Yard told the Daily Mirror: “A post-mortem examination will be carried out in due course. Police are working to establish the man’s identity.”