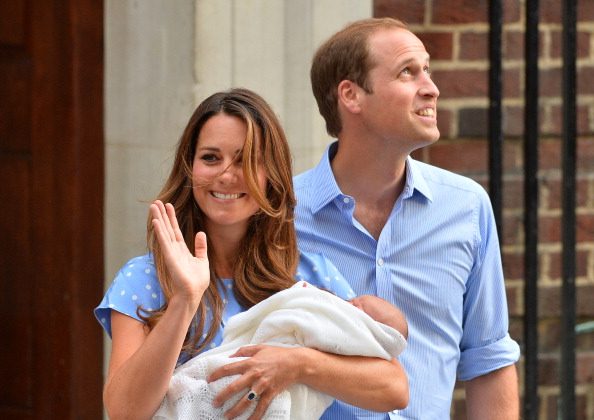 Prince William and Catherine, Duchess of Cambridge show their new-born baby boy to the world's media, on the steps outside the Lindo Wing of St Mary's Hospital in London on July 23, 2013. The baby was born on Monday afternoon weighing eight pounds six ounces (3.8 kilogrammes). The baby, titled His Royal Highness, Prince (name) of Cambridge, is directly in line to inherit the throne after Charles, Queen Elizabeth II's eldest son and heir, and his eldest son William. (BEN STANSALL/AFP/Getty Images)
Royals

Princess Kate and Prince William exited the London hospital with the royal baby boy in arms on Tuesday, amid throngs of media photographers. It was the first time photos of the boy were taken. Now, the royal couple with child in arms will travel to Kensington Palace.

“He’s quite heavy – we’re still working on names,” William said, according to a live feed.

The child was born on Monday afternoon at 4:24 p.m., but until Tuesday, what he looks like or his name has been a mystery.

“The Duke and Duchess of Cambridge and their son will travel home to Kensington Palace,” reads a statement from the palace. “Their Royal Highnesses would like to reiterate their thanks to the hospital for the care and treatment they have all received.”

Before the child exited the  Lindo Wing of St. Mary’s Hospital, Prince Charles, the boy’s grandfather, told the media: “Wait and see, you’ll see in a minute.”

Kensington Palace said the baby was born at 8 pounds and 6 ounces, drawing massive media coverage around the world.

The child, if he lives long enough, likely be the heir to the English monarchy.