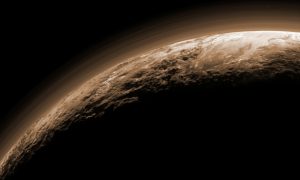 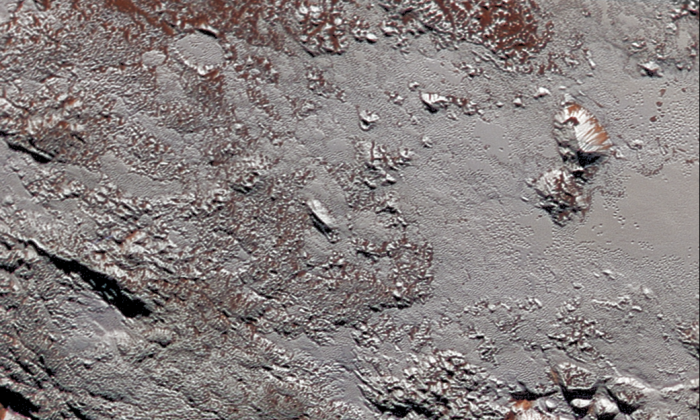 Scientists with NASA’s New Horizons mission have assembled this highest-resolution color view of one of two potential cryovolcanoes spotted on the surface of Pluto by the New Horizons spacecraft in July 2015. (NASA/JHUAPL/SwRI)
Science

Our concept of the planet Pluto is no longer merely fantastical.

For a even better view of the breathtaking landscapes encompassed in the tiny strip, refer below to a video released by NASA. The short movie pans down the strip from top to bottom, giving us a brief tour of the planet’s hummocky cratered uplands, rocky terrains, and cellular nitrogen ice plains, among other features.

Especially of note is the cell walls in the nitrogen ice plains. The walls are created through a process called convection. Think of how hot magma rises and replaces colder denser, material at the earth’s surface, except in Pluto’s case, it is hotter ice in reservoirs warmed by Pluto’s internal heat rising and replacing colder ice.

“For the first time, we can really determine what these strange welts of the icy surface of Pluto really are,” said William B. McKinnon, professor of earth and planetary sciences in Arts & Sciences at Washington University in St. Louis, who led the study. “We found evidence that even on a distant cold planet billions of miles from Earth, there is sufficient energy for vigorous geological activity, as long as you have something as soft and pliable as nitrogen ice.”

Needless to say, the new images are a big step toward better understanding the icy world, and researchers are thrilled with the historic achievement.

“This new image product is just magnetic,” said Alan Stern, New Horizons principal investigator from Southwest Research Institute in Boulder, Colo. “It makes me want to go back on another mission to Pluto and get high-resolution images like these across the entire surface.”

With the most distant planet Pluto reached, the New Horizons craft has completed its initial exploration of the solar system. Next, New Horizons is expected to conduct another close flyby of Kuiper Belt object 2014 MU69, expected Jan. 1, 2019.