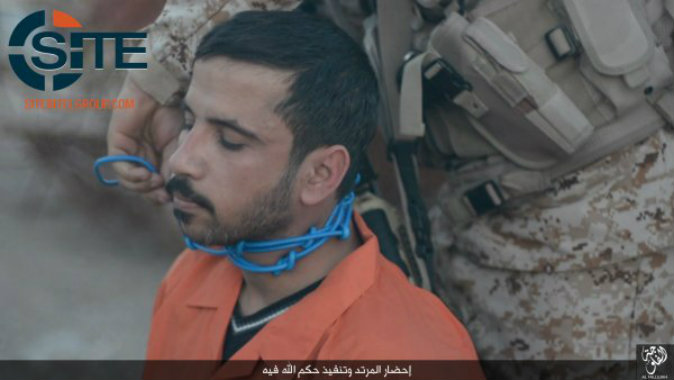 An ISIS prisoner being executed in the city of Falluhjah, Iraq (SITE)
Middle East

Photos: ISIS Executes 6 ‘Spies’ With Explosives Around Their Necks

A new ISIS video shows a hospital worker being decapitated by explosives wrapped around his neck for allegedly spying for the Iraq government.

Mohamed Mahmoud Dayih is accused of using his position as a clerk at the Fallujah General Hospital to spy for the Iraqi government, which is at war with ISIS, according to the Daily Mail.

A video shows blue wires being wrapped around his neck, which are then detonated.

A video shows blue wires being wrapped around his neck, which are then detonated, decapitating him.

Spying for the West and the Iraqi government has been the standard reason ISIS has used for its executions.

The video also shows two policemen in orange jumpsuits and two “apostates” being executed at gunpoint, and another Fallujah policeman being beheaded.

The city of Fallujah is currently under siege by Iraqi government forces, and is isolated from the rest of the territories controlled by ISIS.

Over 600 ISIS fighters fled Fallujah in late February, according to Iraqi News.