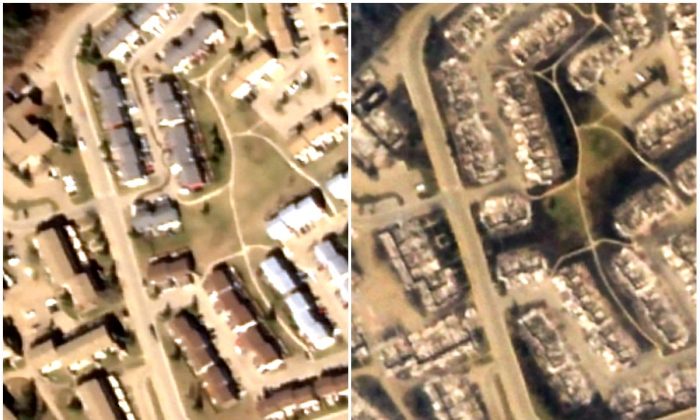 Comparison of satellite images taken before (L) and after wildfires hit Fort McMurray in Alberta, Canada, in May 2016. (Screenshots of Google Crisis Map)
Canada

The wildfires in the Fort McMurray area, Alberta, Canada, are not yet under control, but firefighters are hoping the weather will help quell the spread.

A total of 34 wildfires are burning, with five out of control.

The sky over the city was clear enough on Friday for a satellite to capture images that reveal, to some extent, the damage Fort McMurray suffered during the fire.

The images taken after the fire were enhanced for increased contrast, clarity, and sharpness.

This is the before and after image of the River View Heights and Hilltop Estates neighborhoods in the central part of the city by the Athabasca River.

This is the Waterways area.

Here is some helicopter footage of some parts of the city.

Roughly 1,600 structures have been damaged in the city, Rachel Notley, the Alberta Province Premier, said on May 4.