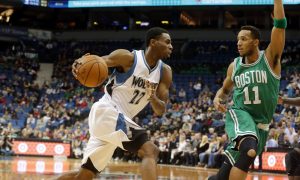 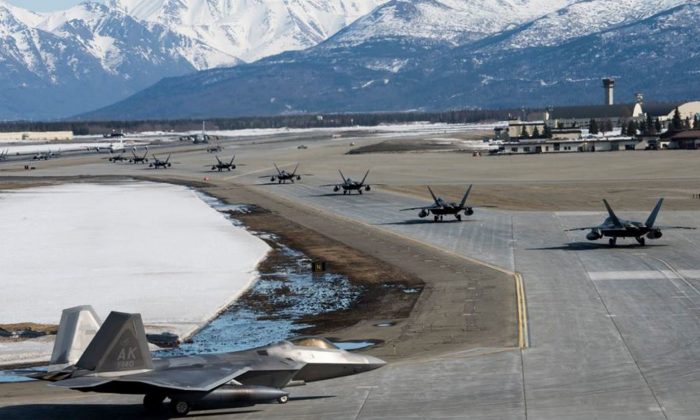 Dozens of F-22 Raptors “elephant walked” on a runway at a military base in Alaska on March 26 in a display of force.

An “elephant walk” refers to the close formation of military aircraft right before takeoff.

Stars and Stripes reported that in the demonstration, there were 24 Raptor stealth fighters, a C-17 Globemaster III transport plane, and an E-3 sentry.

“The maneuver calls for aircraft to taxi en masse for a fast group take-off,” Stars and Stripes reported.

The display took place at Joint Base Elmendorf-Richardson.

The routine was part of the Polar Force two-week-long exercise that allows military personnel to show off “their abilities to forward deploy and deliver overwhelming combat airpower,” officials told Fox News.

Air Force officials also released a video of the showcasing of force.

According to F-22 manufacturer Lockheed Martin, the F-22 “has delivered on its promise to provide unprecedented air dominance” and has persistently “demonstrated precision attack capabilities, defeating both air- and ground-based threats with unparalleled lethality and survivability.”

But a 2017 report from the Pentagon to Congress detailing the production for F-22s said that producing more of the plane would be an expensive endeavor.

“Moreover, it would take so long to reconstitute the production line that it would not be until the mid to late 2020s before the first ‘new’ F-22s would have flown. By that time, the F-22 would be increasingly challenged by enemy—Russian and Chinese—capabilities,” reported the National Interest last year, summarizing the report.

It added: “While the F-22 continues to remain the premier air superiority solution against the current threat, new production deliveries would start at a point where the F-22′ s capabilities will begin to be challenged by the advancing threats in the 2030 and beyond timeframe. F-22 production re-sta1t would also directly compete against the resources necessary to pursue the Chief of Staff of the Air Force-signed Air Superiority 2030 (AS 2030) Enterprise Capability Collaboration Team (ECCT) Flight Plan, which addresses the critical capabilities required to persist, survive, and be lethal in the rapidly evolving-highly-contested Anti-Access/Area-Denial (A2/AD) threat-environment.”

The Pentagon report stated that by the next decade, the F-22 won’t be able to compete with models produced by China and Russia.

“Moving closer to 2030, it is important to acknowledge that threat capabilities have and will continue to evolve at a rapid rate, creating highly contested environments,” its report said. “The threat drives what capabilities are needed to achieve air superiority in the future, and the rate of threat evolution drives the timelines for the needed capability. Therefore, a conversation regarding restarting the F-22 production line should include an analysis of what capability and capacity is needed in order to achieve air superiority in future highly contested environments. An understanding of the threat along with necessary capability development will help provide an understanding of how restarting F-22 production will not fulfill capacity and capability requirements in the future.”