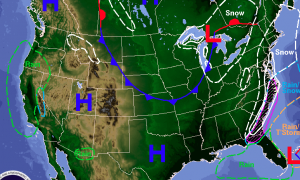 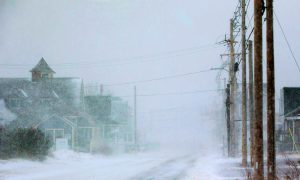 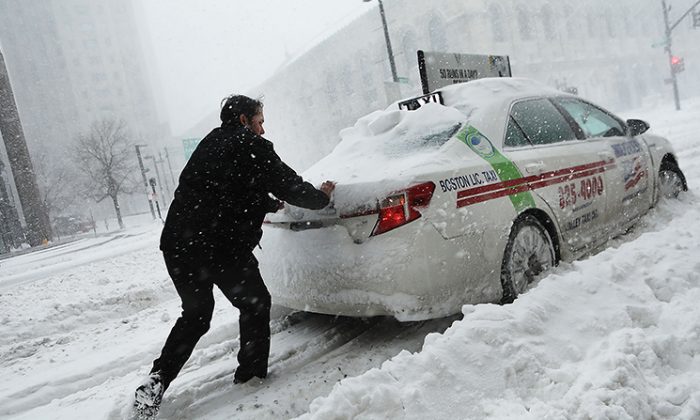 A man pushes a taxi car in the streets of Boston as snow falls from a massive winter storm on Jan. 4, 2018. (Spencer Platt/Getty Images)
US News

The “Bomb Cyclone,” also being called “Winter Storm Grayson,” exploded over the northeastern United States on Dec. 4, powered by the combined forces of low barometric pressure, frigid air, screaming winds, and the highest tides of the year, influenced by last week’s “Supermoon.”

This hyper-powered quartet of natural forces combined to create over a foot of snow, single-digit temperatures, and rivers of semi-frozen slush, sometimes several feet deep on the streets of Boston and some Massachusetts seaside communities.

According to Weather.com, snowfall measured up to 22 inches in Maine. Everywhere from the coastal Virginias to the tip of Maine got at least a foot of snow.

Nantucket, an island town off the Massachusetts coast, was hit with 76 mph winds. Similar gusts tore through the entire coastal region.

Intense #blizzard conditions along the boardwalk of Virginia Beach’s Oceanfront. #WinterStormGrayson is a very strong cyclone just off the shore, and boy are the effects impressive! Winds at ~40 mph now (5am). #StormHour #vawx pic.twitter.com/CZ0wDxveYw

The wind brought down enough power lines that some 54,000 residents were left in the cold and dark in the Boston area, according to the Boston Globe.

Here is a look at the total snowfall for the January 3-5, 2018 Blizzard. pic.twitter.com/GrhixWra5p

The Supermoon, which is a full moon which occurs when the Moon is at the closest point of its orbit around the Earth, brought record-setting high tides.

According to the National Weather Service, Boston tides ran the highest since recording began in 1921, breaking the previous set during the Blizzard of ’78.

Cars were seen floating down the street in the fishing town of Chatham, Massachusetts, as walls of water 4 feet deep coursed through the streets.

Another image from high tide today in the area of King Caesar Rd. pic.twitter.com/2npUFXFOZN

Look at this video outside our window of flooding in #Boston historic #FortPoint #Seaport neighborhood that is causing big dumpsters to float down the street. #blizzard2018 @CNN @WCVB pic.twitter.com/mjfrZJYnKr

CBS Boston reports that the entire parking lot of Gloucester High School was full of cars which first flooded, then froze in place.

“It’s an unfortunate situation. We’ve never had a storm surge like this in the city. This parking lot was flooded. They can’t be salvaged. They were all under water and floating,” Gloucester Chief Administrator Jim Destino said.

Nantucket was lucky by comparison. The old whaling port only saw about three feet of floodwater. Gloucester, another historic fishing port, saw about the same.

Seventy homes were flooded in Winthrop, Massachusetts. According to the Boston Globe, firefighters had to cut power to these buildings to prevent electrical fires.

DXFD is working with @MassEMA to get resources to assist with flooding in Duxbury neighborhoods that are now starting to ice up. #DXFD #Grayson #ICE #masnow pic.twitter.com/xXzAZCmQ7w

“Normal tides in Boston are between 9 and 10 feet,” Benjamin Sipprell, a meteorologist for the National Oceanic Atmospheric Administration, told The Daily Beast.

Check out what floated by this Duxbury home during Thursday’s flooding. It was a Christmas decoration in a neighbor’s yard. pic.twitter.com/HQbZRnFXub

As if rivers of slush and feet of snow—and a high temperature of only 15 degrees—didn’t cause enough misery, after the snow passed, the temperature fell to the single digits, DailyMail reported.

“There are lots of reason[s] to be concerned when you’re talking windchills of 30 to 40 below zero in some areas,” said Kurt Schwartz, director of the Massachusetts Emergency Management Agency.

In Quincy and Revere, Massachusetts, cars were also surrounded by floodwater which then froze, trapping cars in an impenetrable ice sheet.

The National Guard had to be summoned to rescue some 20 people in the city of Boston, the Boston Globe reported.

According to CBS, at least 20 people have died of the result of Winter Storm Grayson—so far.

Meteorologists began calling Winter Storm Grayson a “Bomb Cyclone” because it underwent what is called “bombogenesis”: when atmospheric pressure drops more than 24 millibars in 24 hours.

This storm saw a pressure drop of 59 millibars in 24 hours between Jan. 3 and Jan. 4—which according to data compiled by Dr. Andrea Lopez Lang from SUNY-Albany and David Roth from NOAA’s Weather Prediction Center, was the largest recorded drop in that part of the Atlantic since 1976.

According to the National Weather Service, this storm system has brought unusually cold weather to the entire nation east of the Mississippi. The lowest temperatures (compared to average) will hit in an arc north from Ohio and east through New England.

New England can expect night-time lows around zero, and even as far south as North Carolina, single digits can be seen.

The National Weather Service predicts the arctic weather will remain for the next few days.