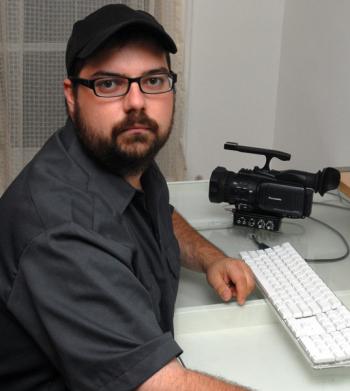 NEW YORK—When Jeffrey Rae, a 28-year-old East Village resident and communications worker for local labor unions was approached by Students for a Free Tibet (SFT) to go to China during the Olympics to document a series of planned protests, he agreed. Little did he know that he was about to get a first-hand look at the intolerance of China's security forces when dealing with public protests.

SFT had planned a series of protests during the Beijing Olympics and wanted to be sure that the protests would be documented, and make it out of China to the press.

Rae was educated as a photojournalist at Rochester Institute of Technology. He had previously traveled to Mexico with fellow documentarian Brian Conley after their mutual friend, also a documentary filmmaker, had allegedly been murdered by local police.

Rae agreed to go to China even though he had not been involved in previous Tibetan activities. “To be honest, I really didn’t know much about Tibet,” said Rae. But he agreed to go, he said, “Mainly because I’m very concerned with freedom of the press, and from what they told me, no one was going to cover them because it’s too dangerous.”

“I knew they were taking a risk doing what they were going to do, and it’s important that it be captured,” said Rae.

With plane tickets purchased by SFT, Rae and Conley set off to China on Aug. 9. They were to be contacted by phone when they arrived in Beijing. Rae received a phone call once he was in China informing him that a protest was to be held at the Ethnic Minorities Park in Beijing on Aug. 13.

At the park, a group of about a half dozen pro-Tibet Westerners flew a “Free Tibet” banner from a building in the park and then locked their bicycles together at the park entrance. They chanted “Free Tibet” while holding a banner stating “Tibetans are Dying for Freedom” and wearing “Free Tibet” T-shirts. Rae was able to successfully photograph the event without disruption. He then uploaded the photos for SFT members to access.


He and Conley spent a few days being tourists in Beijing. Then Rae received another call to meet at CCTV (the state-run Chinese television network) for another planned protest. He was to arrive at 5:45 a.m. on the appointed day but arrived about 15 minutes early and felt conspicuous as the lone Westerner out on the streets so early in the day.

Rae decided to circle the block. He said he was followed by a police car traveling at walking speed for “about a quarter of a mile” and, consequently, he missed the event. It was another pro-Tibet banner being displayed from CCTV headquarters.

On Aug. 18, Rae received instruction to meet at the “Pass by Bar,” a restaurant in the Dong Cheng District of Beijing. At the restaurant, said Rae, “a number of people came and left, some talked about what they were going to do.” All of the protesters were Westerners. At about 1 a.m., Rae was still at the restaurant with two others; Conley had returned to their hotel earlier in the evening.

“It was kind of eerie,” said Rae. “We were being hurried out of the restaurant and then when we got outside the streets were completely empty.”

“When we got to the corner of the main street, there were about 40 police officers waiting for us, and a bunch of people with video and still cameras … Later I was told by someone in the detention center that we were on CCTV,” said Rae. The police apprehended the three men—Rae, Tom Grant, and James Powderly—and demanded their passports and cell phones.

They were taken to a nearby hotel and interrogated separately in basement conference rooms. After a 20-minute interrogation, they were then transported to another hotel at about 2:00 a.m. They were then subjected to a 22-hour interrogation until the following night at about midnight.

Rae described his main interrogator as a male police officer in his 30s with bad teeth and a mean streak. He shouted into Rae’s face in Chinese; his questions were then translated into English for Rae.

“They wanted every detail of every day I had been in China” … They wanted to know who I had sent photos to,” and mostly they wanted the passwords to Rae’s cell phone and laptop, which he had locked with password protection.

“The fact that we were creating content pictures or video and then distributing that content—that to them was a far worse crime than anybody who had dropped a banner or held a sign.”

Rae refused to give the police the passwords, which made them very angry. One interrogator stood menacingly in front of Rae with a steel bar in his hand. He also hit him on the shoulder with an open hand. “I don’t want to exaggerate what happened,” said Rae, “but after having been awake so long, it’s difficult to get hit like that.”

At one point, Rae asked his interrogator what was going to happen to him. “We’re not sure if we want to slit your throat or shoot you,” was the answer he was given.

After the 22-hour interrogation, Rae was made to sign and fingerprint every page of a 45-page document that was all in Chinese. He and the others were then driven to the Chong Wen detention center about 30 minutes away. They were kept in separate cells and made to wear prison uniforms of red T-shirts and red shorts. The police told him he was not in a jail, that it was “just a detention center.”

Rae was mixed in with the general population of prisoners—about a dozen people in a cell with narrow wooden platforms as beds, all pushed up against a wall. When they slept, it was shoulder-to-shoulder. He was given a military blanket that reeked of urine and a dirty plastic bowl and spoon for meals. Potable water was made available to the prisoners for only 15 minutes a day. Rae scrounged an empty plastic soda bottle to store water in for the day.

One of his cellmates was a Chinese national who was sentenced to one year for scalping tickets to the Olympics.

Another was a young man named Yi, who Rae says was 22 years old. Yi is a Falun Gong practitioner and was arrested after Falun Gong literature was confiscated from his office.

“This is the most innocent thing ever. The majority of the time, he just sat there and meditated. The most peaceful person there,” described Rae. “This guy did absolutely nothing wrong except they found some literature in his office.”

“Yi spoke English very well. He was being given a two-year sentence at a labor camp. He teared up when he told me about it, and he was very scared. He knew that many people are tortured and die in that labor camp. The next day the guards came and took Yi away,” said Rae.

That was the last time he saw Yi. “He was going to be sent somewhere where he could be tortured and die,” said Rae.

Most days while in detention, Rae was taken to a small room after breakfast. The room had a steel chair that bolted to the floor and a steel bar that locked across his waist. The chair was behind bars, and outside the bars was a desk where a police officer sat across from him and interrogated him for most of the day. Rae was told that he had “hurt the feelings of all Chinese people” and was made to sign an apology for what he had done.

Rae’s detention lasted six days. When he asked to speak to someone from the American embassy, he was told, “Your embassy doesn’t want to see you—you are engaged in political activity, and they don’t want any part of that.”

Rae did not see anyone from the U.S. Embassy for four days. When he did, it was in an air-conditioned room “and in the nicest chair I had sat in China. It was super cushy and if that’s the only place you saw at the detention center, it would create the illusion that it was not such a bad place,” said Rae.

On Aug. 24 , after the closing ceremony of the Olympics, Rae and his colleagues were taken to the airport and made to buy $2,000 plane tickets home, even though they already had plane tickets. Rae refused to make the purchase of $4,000.00 for himself and Conley (Conley had no credit card), and the police physically forced Rae to sign the credit card charge or be taken back to the detention center.

Of his experience in China, Rae says, “As far as our treatment went, it was nothing compared to what some of the other people were facing. I met a Philippine man who spoke pretty good English. He was punched repeatedly in the face during his interrogation.”