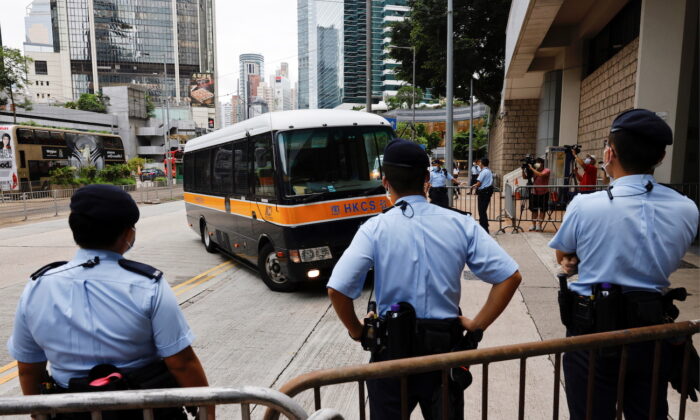 A prison van arrives at the High Court on the first day of trial of Tong Ying-kit, the first person charged under a new national security law, in Hong Kong, on June 23, 2021. (Tyrone Siu/Reuters)
HK Current Affairs

On April 28, Swiss-born photographer Progin Marc Gerard, 77, was re-acquitted in a lawsuit over his filming the “Lunch with You” demonstration in Central District, Hong Kong, in October 2019. After the ruling, Gerard said that he expected the original verdict would be upheld, and the prosecution had wasted time and money by asking for a review without any new evidence.

In her judgment, Magistrate Stephanie Tsui May-har upheld the verdict of “not guilty” she originally pronounced a year and a half ago, and ordered the prosecution to pay the defendant’s legal costs. The first not guilty verdict occurred on Nov. 13, 2020, when Tsui May-har said there was no evidence that Gerard had physical contact with protestors or anyone else present at the time, that he had not assaulted bank employee Lin Nan, and so, the so-called act of aiding and abetting disorder in public places was unfounded.

But the prosecution said that during the 2020 trial the magistrate ignored Gerard’s intentions, and requested a review. The prosecution believed that Gerard’s behavior was “willful blindness,” that Gerard had been filming social events in Hong Kong for many years, but did not consider that his closing a door would prevent or delay Lin Nan from entering the building. Hong Kong prosecutor Kelvin Tang Ming-chung said Gerard closed the door on purpose.

Lin Nan, an employee of JPMorgan Chase, had an altercation with protesters when he filmed the protest crowd with his mobile phone at the “Lunch with You” demonstration in Central District on Oct. 4, 2019. The video shows Lin Nan walking towards a glass door, Gerard coming through the door holding a camera, and then closing it. Gerard then leans in the corner in front of the glass door and starts shooting the events at the scene. Prosecutors allege that Gerard’s closing the door and blocking the entrance resulted in Lin Nan being beaten, and a protester throwing an umbrella at him.

According to the report by the South China Morning Post in 2020, Lin Nan was born in Xi’an, China, and settled in Hong Kong in 2008. He had obtained Hong Kong identity at the time of the incident.

Magistrate Tsui May-har said in her recent ruling that she did not agree with the prosecution’s allegations because the defendant, Gerard, was holding a camera to film the events and that Lin Nan could open the door and enter the building at any time.

Tsui May-har said that the dispute in this case was the defendant’s intention when he closed the door. Considering factors such as the defendant’s background, interest in photography, lack of political connections, and keeping a distance from the people at the scene, she believed that the prosecution’s accusation was unfounded, so she upheld the original verdict that the defendant was “not guilty” of the charges.

Gerard believes that the verdict was a fair verdict, and he is grateful that he has an excellent team of lawyers. He said that there are many more important cases in Hong Kong, and it was a waste of time and money to review his “closing a door” case because the prosecution failed to provide any new evidence.

Gerard has been living in Hong Kong for 45 years and has no plans to leave. He said the case had little impact on him, and he could still live as before and go out to shoot. But he also noticed the current changes in Hong Kong, such as “the police don’t like you taking pictures now.” When he was first acquitted in November 2020, Gerard said that he had been filming major events in Hong Kong for nearly 10 years and had never taken any “measures.” He also said that he hadn’t been worried about the prosecution’s appeal.