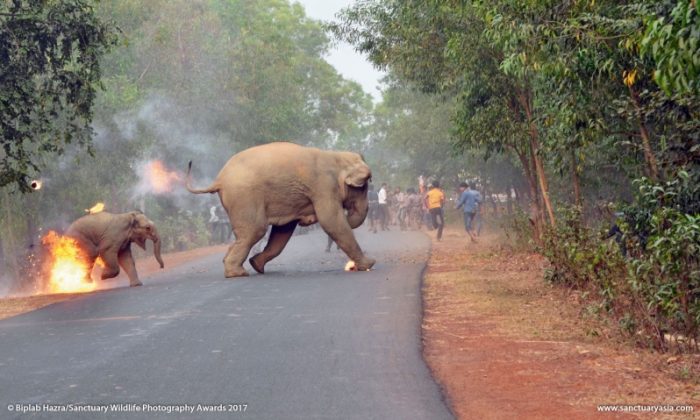 A photograph taken in West Bengal, India, showing elephants being attacked by residents, that received the first place award in a photography competition put on by Indian magazine Sanctuary Asia. (Sanctuary Asia)
India

A picture of burning elephants in the Jhargram district of West Bengal, India, won the top award of a  wildlife conservation photography competition earlier this month.

The eerie photo, titled “Hell Is Here,” shows the conflict between elephants whose territory has been encroached upon by humans, and the farmers who try to protect their crops from the roaming elephants.

#SanctuaryAtTheQuarter: Come understand #AsianElephants and their conflict with the human world, at the Royal Opera House on 7th Nov at 7pm. pic.twitter.com/PDn86Lr578

Events like the one depicted in the photograph are routine, the captions says.

“The ignorance and bloodlust of mobs that attack herds for fun, is compounded by the plight of those that actually suffer damage to land, life and property by wandering elephants and the utter indifference of the central and state government to recognize the crisis that is at hand,” the caption says. “For these smart, gentle, social animals who have roamed the subcontinent for centuries, hell is now and here.”

India holds some 60 percent of the world’s Asian elephant population, according to Sanctuary Asia.

“The calf may not have been intentionally set on fire by the villagers living in the vicinity,” he said. “But bursting crackers and throwing fireballs on elephant herds has been a common practice in this part of West Bengal.”

Hazra works as a brick kiln owner and does photography as a hobby.


The photography competition is held by the magazine Sanctuary Asia, whose website says it is the leading conservation and wildlife magazine in India.

Sanctuary Asia editor Anirudh Nair said the magazine gave the top award to Hazra’s photograph as a way to raise awareness about the plight of elephants.

“We wanted to raise awareness on the practice of violence against elephants in West Bengal and in other parts of the country,” Nair told The New Indian Express.